Visitors to Runyon Canyon Park in Hollywood are celebrating after the city of Los Angeles acquired a 14.9-acre property that will be annexed into the park.

The property is located at 2450 Solar Dr. in the Hollywood Hills and includes a trail and hilltop in the northwest portion of the park. The $8.75 million land purchase was made possible through a partnership between the Los Angeles Department of Recreation and Parks and the Trust for Public Land. 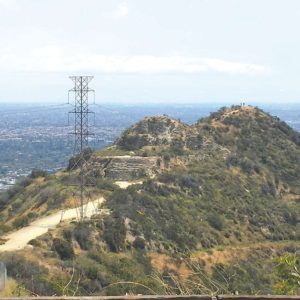 The land acquired for Runyon Canyon Park includes a trail and hilltop with views of the Los Angeles skyline.
(photo courtesy of Don Andres)

“I am extremely happy. It’s a very positive thing,” said Don Andres, president of the Friends of Runyon Canyon Foundation. “People in the community have been trying to preserve the area for well over a decade. It shows the importance of a private foundation working to improve our parks.”

Los Angeles City Councilman David Ryu, 4th District, supported the land acquisition. In February, the city loaned the Trust for Public Land $1.5 million because it was uncertain whether the organization would receive promised grants in time for the purchase. Ryu helped expedite the process.

“Runyon Canyon is a beloved regional park that serves as a significant recreational resource for the people of Los Angeles. This purchase will expand our city’s open and green spaces, protect our natural habitats and create healthier communities for all,” Ryu said. “Most importantly, the newly acquired 14.9 acres will forever be removed from the threat of development and instead preserved for many generations to come.”

Groups involved with the purchase were concerned the property would be privately developed. Andres added that the parcel will be beneficial to wildlife that lives in the park in the hills northwest of La Brea and Franklin Avenues. Representatives of the Trust for Public Land also praised the acquisition.

“Expanding Runyon Canyon is a victory for the millions of Angelenos who regularly visit this park to get outdoors,” said Tori Kjer, Los Angeles program director for the Trust for Public Land. “This trail and knoll are one of the most popular spots in Runyon Canyon and this is a perfect example of the value of investing in natural outdoor spaces for our densest urban communities.”

The purchase ensures hikers and park visitors can continue enjoying the site in perpetuity.

“Runyon Canyon Park is a local treasure and we will continue to do everything possible to conserve this land to ensure Angelenos and visitors are able to enjoy recreational activities at the park for generations to come,” said Michael Shull, general manager of the Department of Recreation and Parks.