In February 1967, 6-year-old Tommy Hoag became the first Children’s Hospital Los Angeles patient ever to undergo a kidney transplant. A bout with scarlet fever left Tommy’s kidneys infected with glomerulonephritis, a disease that damages their ability to filter waste and fluids from the blood. 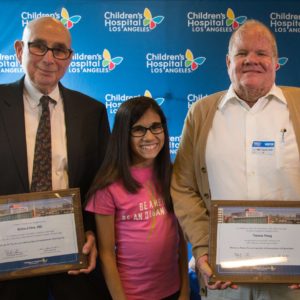 (photo courtesy of Children’s Hospital Los Angeles)
Hoag (right) received a kidney from his father at age 6, and it’s lasted ever since

Hoag, now 56, holds one of the hospital’s most notable records. The kidney, given to him by his father, has lasted 50 years and counting. Hoag’s kidney is one of the longest functioning live donor kidneys to a child in U.S. history.

On March 7, Hoag participated in a ceremony held by the hospital’s current nephrology team to mark the 50th anniversary.

Richard Fine, a former pediatric nephrologist, diagnosed Hoag with kidney failure and glomerulonephritis. Fine helped start the dialysis program at the hospital the same year. This program continues to be one of the two largest pediatric dialysis programs in the United States.

Doctors say it’s rare for a donor kidney to last so long and consider Hoag one of the hospital’s biggest success stories.

“The success of Tommy’s transplant really jump-started the nephrology program here at Children’s Hospital,” said Carl Grushkin, the hospital’s current Chief of Nephrology, who happened to be a resident in 1967 when Hoag’s surgery took place. “To date, we have performed nearly 1,100 kidney transplants since Tommy’s, and have one of the most successful transplant programs in the country based on recipient and graft survival.”