Voter turnout in West Hollywood is on par with elections in 2015, according to city officials. Some votes are still left to be counted, but incumbent Councilmen John Duran and John Heilman hold strong leads at press time. 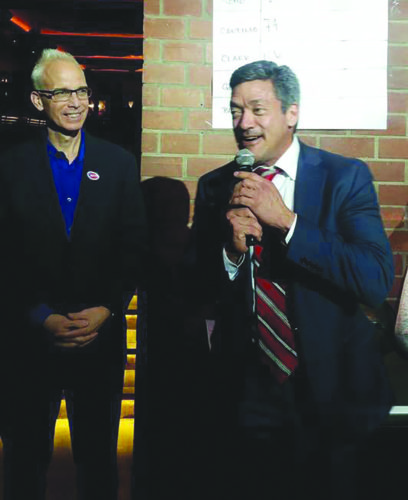 On Wednesday, Duran said the results showed that voters in West Hollywood are smart and intelligent people, despite the “nasty mail that was flying around” – referring to mailers from independent expenditure committees.

“We ran positive campaigns,” Duran said. “We didn’t go negative and I’m proud of it.

“It’s tough. West Hollywood is sandwiched with Los Angeles in this huge region. And with predictions of half a million more people coming to the county in the next few years, more challenges are coming. West Hollywood is a small piece in the puzzle in helping keep that growth reasonable.”

He said the city’s focus should remain on providing and preserving affordable and market rate housing, “in the middle of all the millions of people here.”

“All of us (in the county) have to figure out how we’re going to connect, and provide water and power and infrastructure,” he said.

Candidate Cynthia Blatt proved the momentum she built as a newcomer wasn’t a fluke. Her involvement at city hall started a few years ago with United Neighbors for Responsible Development in opposition to development on Kings Road. But as of Wednesday afternoon, Blatt was tied for third with former Councilman Steve Martin with 1,532 votes – nearly 400 less than Duran.

Communications director Lisa Belsanti said it’s common for 600-800 votes to be left to count with provisional or vote by mail ballots. But she said she hasn’t seen those types of votes tip the results after election day.