Incumbents won Election 2017 throughout the county, as results so far show solid leads to retain their seats.

All results are tentative, but Los Angeles Mayor Eric Garcetti stands with 81 percent of the vote, while none of his 10 opponents surpass 8.5 percent. 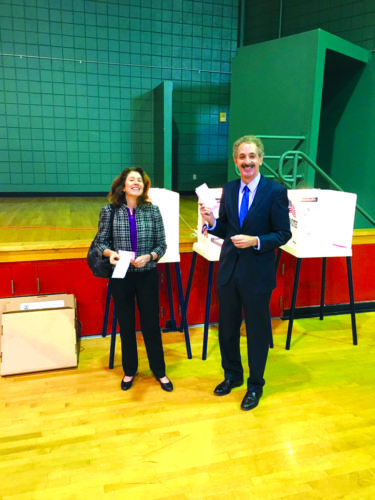 City Attorney Mike Feuer and his wife Gail make sure he keeps his job.
(photo courtesy of Mike Feuer)

“The greatest privilege of my life is serving the city we love – and so I’m back at work this morning as your mayor with gratitude and enthusiasm,” Garcetti said in a statement. “Together, we are doing big things in Los Angeles – we are leading our nation to a higher minimum wage, are executing the nation’s largest infrastructure plan and are outpacing the nation on jobs.”

Despite a crowded field of opponents, Councilman Mitch O’Farrell, 13th District, holds a solid lead with 60 percent of the vote.

“I am grateful, humbled and honored by the strong showing of support I received last night in my bid for reelection to the Los Angeles City Council,” O’Farrell said in a statement on Wednesday. “This victory means my team and I can continue serving you in the great 13th District. We ran a grassroots, block-by-block campaign and I couldn’t be more proud of the staff, volunteers and supporters who worked tirelessly over the past few months.

“No matter who you are, where you are from, what religion you practice, or what language you speak, I will fight for an environment where everyone’s contributions are valued and our diversity is celebrated in the City of Angels.” 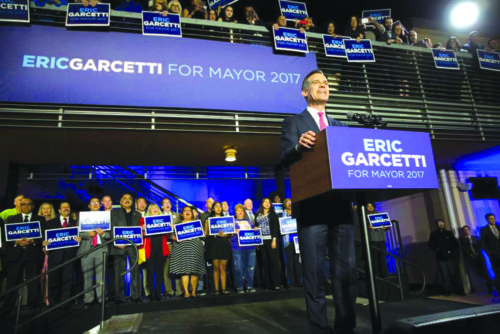 For the race for the 5th District, Councilman Paul Koretz said he has never been attacked as much in a campaign in his career, spanning back to his time in the Legislature and as a councilman in West Hollywood. But it wasn’t enough to stop him, as the councilman holds a 66 percent lead over challengers Jesse Max Creed and Mark Herd.

“I deeply appreciate the trust and support of the residents of CD5,” Koretz said in a statement. “I have worked hard to protect the quality of life in our neighborhoods and I will never forget the hundreds of community leaders who stood by my side in this election. There is still much to do, but with the passage of Measures M, HHH and H we will have a once-in-a-lifetime opportunity to tackle some of the difficult problems our city faces. It is an exciting time and I look forward to continuing to work in the issues that we all care about.”

City Attorney Mike Feuer was not challenged, and received all 185,310 votes cast for the office that have been recorded so far.

“I’m grateful to the people of Los Angeles for giving me the opportunity to continue to serve as city attorney,” Feuer said in a statement. “During my first term, we’ve reached out to our neighborhoods, improving the quality of life across Los Angeles and tackling issues that matter.”

The same was true for Controller Ron Galperin, who received 175,086 votes as of Wednesday afternoon.