How much does a vote cost in L.A. County?

The county election results on Tuesday will be certified by the end of the month, but with 100 percent of precincts reporting an 11.2-percent turnout, it appears that voter participation is decreasing, and is still much lower than officials had hoped for. 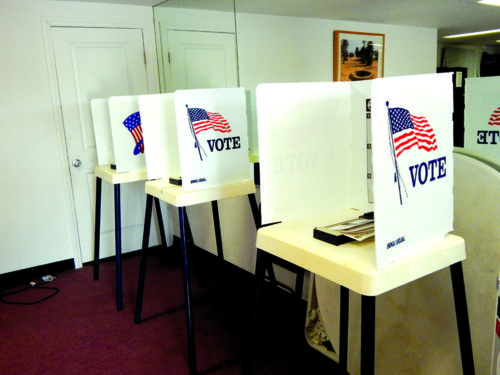 Turnout for the municipal elections continues to decrease in some cities, despite growing rates of campaign fundraising.
(photo by Edwin Folven)

Election spending, however, continues to increase. Many factors – such as exhaustion after a stressful national election four months ago, or general satisfaction – will be attributed to Tuesday’s turnout, and it could be years before all factors are realized. But it can at least be used as one example that money doesn’t guarantee participation.

Money also doesn’t guarantee victory, judging from results so far. The Beverly Press and Park Labrea News reported in February that the LAUSD board race for District 4 drew contributions that surpassed $531,000 – most of which is attributed to challenger Nick Melvoin. But by Wednesday morning, results showed Melvoin down nearly 10,000 votes to Board President Steve Zimmer. The incumbent, however, also benefited from independent expenditure committees spending hundreds of thousands to support him, and at least $85,000 to defeat Melvoin.

Big spending also defined elections for mayor and city council in Los Angeles, Beverly Hills, West Hollywood, and for respective ballot measures. But along with the turnout rates, which rarely surpass 25 percent, it might instead beg the question of how much each vote costs.

Although it was one of the most contentious in recent history, Los Angeles’ Measure S and its divisive nature didn’t help bring people to polls. With 100 percent of precincts reporting, approximately 249,579 people voted on the measure, with remaining absentee or provisional ballots to be counted. Campaigns in opposition and support of the measure criticized each other for the money they spent on campaigns. By Tuesday, opponents to the measure had spent more than $10 million. On Wednesday, results showed 171,831 people voted no. To equate a vote’s value to currency, they spent $58 per vote. Conversely, AIDS Healthcare Foundation, which initiated Measure S, spent more than $5 million on their campaign, and earned 77,748 votes for more than $64 per vote.

On Tuesday, Measure S campaign director Jill Stewart said it was upsetting to see such low turnout, and agreed that the “cost per vote” aspect, in some form, crossed her mind this election cycle. She said Measure S would have had better chances if money was not such an integral part of the campaign equation, however she conceded she has found no new strategies or solutions to increase voter turnout, and described it as a “mystery.”

The same could be said with Melvoin and Zimmer in their campaigns for LAUSD, who respectively describe campaign finance as “broken” and an “obscene reality.”

In West Hollywood, the campaigns for city council garnered similar donation amounts as those in LAUSD District 4, in a city of approximately 35,000 people – most of whom have a tendency to not show up to vote.

“In 2013, there were 1,200 more voters (in West Hollywood) than there are now,” said resident David Reid at a city council meeting on Monday, pleading listeners to vote. “Still, only 20 percent – one in five people – vote. That means that either everyone is just as happy as can be, or they’ve just thrown up their hands and given up. Why doesn’t the city of West Hollywood make national news tomorrow, by having 80 or 90 percent of the people turn out to vote?

“There are so many precincts in the city, you can take an extra 10 minutes and get out and vote. It’s so important. So much is happening, so much money is being spent. Records are being made now on the amount of money that is raised on this election.”

In West Hollywood, it is common for approximately 600-800 votes to be left to be counted for provisional and vote-by-mail, but votes counted after election day have not tipped the results in any recent elections. Results now show incumbent City Councilmen John Heilman and John Duran retained their seats in West Hollywood, and received 2,252 and 1,929 votes, respectively. Duran beat challengers Cynthia Blatt and Steve Martin – who tied with 1,532 votes – by less than 400 votes. The margins in campaign funding were not that close, however. Blatt, for example, so far reported $20,974 in campaign donations, not including independent expenditures, for $13 per vote. Duran has reported $136,000 so far, not including independent expenditures, for $70.50 per vote.

(These amounts also do not include additional funds raised in the two weeks before the election.)

In the March 7 election, West Hollywood’s battle often focused on how candidates raised their money.

“I’m grateful for the fact that I’ve been able to fund my campaign with small generous contributions from people within the community, not necessarily people outside of it,” Martin said on Monday.

On Wednesday, Duran said the results show that the people of West Hollywood are smart and intelligent. They recognize Duran and Heilman as “the two old dudes on the council,” who offer a balance from the three council members whose seats were not up for election. Council members Lindsey Horvath, John D’Amico and Mayor Lauren Meister, are still “new blood” in comparison to the decades Duran and Heilman have been in their seats since before term limits were established.

“I think our campaign finance regulations are reasonable with the $500 limit per donation,” Duran said, adding that they are also restricted from opening campaign accounts more than 18 months before an election. “I knew I’d have to raise $150,000. That’s what it takes.”

Duran said most of the money is spent on mail – one of the most effective ways to reach voters in a city where most people are renters or live in multi-family housing where front doors aren’t as easily accessible. And he attributed his campaign finances to his tenure in public service.

“Most of my money comes from having friends and making relationships over 30 years,” Duran said, citing it as a viable advantage. “I’m not just hopping into this.”

Duran said the voter turnout in West Hollywood suggests apathy, or that people are happy and content with their lives and city government.

“We do everything we can to get people to vote,” said Duran, who participated in public forums, and sent mail to 6,000 residents. “To the point where people say, ‘Enough, stop calling.’”

But he said he couldn’t provide a solution to substantially increase turnout.

Stewart, on Tuesday said she wishes she knew where voters’ interests were going.

“For some, maybe they are OK with the idea that others will take care of democracy for them,” she said.

Reed, the resident in West Hollywood, implored residents to fulfill their civic duty.

“Do what people have died for for 250 years. Go to the polls,” he said. “If you like the way it is, vote for the incumbents. If you’re ready for a change, vote for change.”