The Los Angeles City Council on Tuesday unanimously approved the Miracle Mile HPOZ with the boundaries recommended last week by the Planning and Land Use Committee.

The HPOZ – historic preservation overlay zone – will provide additional protections for the Miracle Mile’s architecture and scale. Assuming that the mayor will not veto, the vote on Tuesday finalized a campaign that started more than two years ago by members of the Miracle Mile Residential Association (MMRA).

Mark Zecca, chairman of the MMRA’s committee for the HPOZ, said the group is very happy for the win for a “neighborhood that was in danger of great change.” 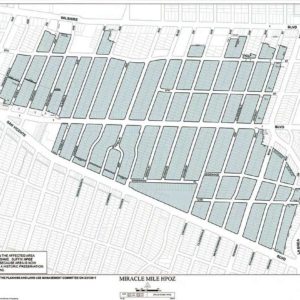 The city released an updated map for the Miracle Mile HPOZ boundaries to reflect the March 21 recommendation to re-instate properties along Olympic Boulevard and north of Eighth Street.
(courtesy of the city of Los Angeles)

“It has been a long two-and-a-half-year journey of educating residents of the benefits of historical protection,” he said via email. “We do this not just for ourselves but for generations to come who will hold dear that this very important part of Los Angeles was saved for them.”

Councilman David Ryu, 4th District, encouraged his colleagues to join him in voting for approval to preserve the “unique, diverse and historic identity of the Miracle Mile, while still providing for new housing opportunities along a major transit corridor.”

Ryu’s office sent 4,300 letters to Miracle Mile residents this year requesting feedback. His office received 533 responses in support of the HPOZ, and 153 in opposition.

The HPOZ includes more than 1,300 properties, predominantly built from the 1920s through the 1940s. There are more multi-family buildings in the Miracle Mile HPOZ than any other HPOZ approved by the city council.

“I believe we must protect and preserve the historic nature of our neighborhoods,” Ryu said. “The establishment of a flexible HPOZ for the Miracle Mile area will help further protect historic buildings and guide balanced growth in the neighborhood.”