Wilshire Division detectives are searching for four suspects who broke into Lala’s Argentine Grill in the Melrose Avenue shopping district on Feb. 21 and stole more than $11,000 in cash.

The burglars forced open a glass door at approximately 5:30 a.m. and stole cash before fleeing the restaurant at 7229 Melrose Ave. They wore “skeleton” masks and were likely part of a burglary crew because they specifically targeted the restaurant, according to Det. Joe Alves, with the Wilshire Division. 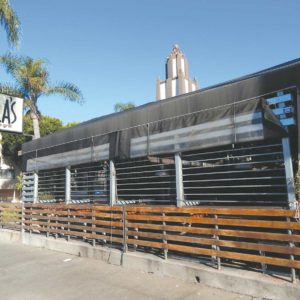 The same suspects are believed to have burglarized the Casa Chocolate Cafe at 5450 Pico Blvd. early the same morning and stole cash. Alves is uncertain why the two businesses were targeted, other than the suspects were committing crimes of opportunity. “It’s a target-rich environment,” he said. “We are trying to work with the business owners on Melrose to get them to harden the target.”

Police recommend security measures such as surveillance cameras, gates that cover business facades and alarms. Alvez added that there is a new film available that can be applied to glass to make windows harder to smash.

Burglary crews from other parts of the city often target businesses in the Wilshire Division, so Alvez wants owners to be aware and take precautions. No further description of the suspects was available.

WeHo offers options to get residents to the polls