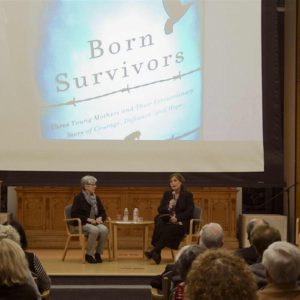 Guests met one of the infant survivors, Hana Berger Moran (left) and author Wendy Holden, who chronicled their stories in her book “Born Survivors: Three Young Mothers and Their Extraordinary Story of Courage, Defiance, and Hope.”

In the waning days of World War II, three young women in the same concentration camp gave birth to babies who, against all odds, managed to survive. Holden tells the story of the three young mothers, who were torn from their families by the Nazis.

They were first sent to Auschwitz, then Freiberg, then Mauthausen.

Despite being strangers to one another, these women had something in common: all were a few months pregnant and they couldn’t let their Nazi captors find out. These young women were determined to hold on to all they had left: their lives and those of their unborn babies.

Through its national campaign “Never Again: What You Do Matters,” the Museum seeks to make critical investments to keep Holocaust memory alive as a relevant, transformative force in the 21st century.