Superheroes survive many impossible feats, but for Hugh Jackman, “Logan” marks the clawed mutant’s last hurrah. After nine films dating to 2000, we finally bid farewell to one of the most iconic on-screen performances of a comic book character (no spoilers intended there, he’s been very public that this is his last Wolverine film). And what an amazing outro this one proves to be. 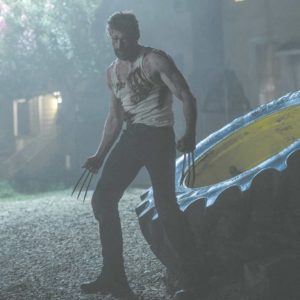 Hugh Jackman returns as Wolverine in “Logan,” marking what he has said will be his last appearance in the series.
(photo courtesy of 20th Century Fox)

Loosely based on the “Old Man Logan” (the name they should’ve used for the film) comics series by Mark Millar, “Logan” depicts our hero long past his prime. It’s 2029. Mutants are nearly extinct, and the X-Men are no more. All that remains is Logan (Jackman) paying the bills by driving rich folks around town. All that money goes toward caring for 90-year-old Charles Xavier (Patrick Stewart), whose powers are on the fritz due to age, with the help of an albino mutant named Caliban (Stephen Merchant) who can track other mutants.

Logan no longer sees himself as a hero, the protector of lost causes, so when he’s approached about a new young mutant, Laura (Dafne Keen), the first seen in years, he cares not. Eventually he’s forced into help by the winds of fate and Charles’ pleading. Good thing too, sine this little girl seems to have much in common with Logan: claws that protrude from her knuckles, fast healing abilities, bones laced with that special metal adamantium and the ability to dispatch enemies both brutally and quickly. How could this be, you might wonder?

And so, a band of unlikely mutants goes on the run from a seedy organization trying to capture them, though the bigger issue is internal: will Logan ever truly know what it means to be in a family?

We haven’t witnessed a superhero film quite like this. Certainly, we’ve seen brutality on screen, and with an R rating, this is an X-Men film that goes places none have traveled before (not counting “Deadpool”). More than that, the violence taps into a central tenant of the story: can you be more than your training? Young Laura is created to be a weapon, something Logan understands all too well, but perhaps he can show her a way out of such a bloody and morbid path.

Jackman is the man. He’s Wolverine, a role he might never top, at least not in number of cinematic appearances. As a character, he’s often too invulnerable thanks to a healing factor and metal bones, but here his body is breaking down. He heals slowly and sometimes his claws don’t easily pop out. This is a level of emotional and physical vulnerability unseen elsewhere for this character and many others of his superhero kin. 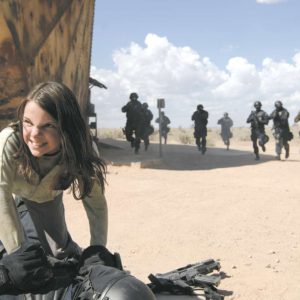 While this is Wolverine’s show, one character outperforms him. Laura, also known as X-23, her lab distinction, begins as a rather familiar trope: the silent-but-deadly little girl we’ve seen in shows like “Stranger Things” and “Firefly.” A cliché origin perhaps, but wildly effective when she screams during rampages of death. Eventually she speaks, adding a new level of humor and sensitivity to the story. So props to Keen, and may Fox have the wisdom to make her the lead in the next “Wolverine” film. “X-23” is your title; do the right thing, people.

So Jackman has clearly said this is it for him, and just weeks before “Logan’s” premiere, Stewart added his name to that list. Professor X can, of course, live on if James McAvoy continues to depict the younger version of the character, but he’s no match for the glory of Stewart, a pop culture gem, amazing human being and perhaps best casting choice in all superhero movie history.

“Logan” is easily one of, if not the best films in the “X-Men” franchise. Rather than bothering with another world-ending yarn that should be cut short rather than unraveled, “Logan” is a western, a story of survival in the great outdoors, far away from skyscrapers and large populations. The credit belongs to director James Mangold, redeeming his previous effort in “The Wolverine.” Finally, a superhero film that proves repetition isn’t the only choice for the genre.

Gritty is the word of choice to describe any superhero film that resists the lightness of the Marvel Cinematic Universe. To call “Logan” gritty is certainly accurate, but it depicts a level of grit beyond a Batman film or Netflix superhero series.

This is the kind of film brave enough to floor viewing expectations, to finally take the story where it needs to go. Sure, the R rating helps, but the real strength of this film is conviction, an obligation to storytelling at its purest.

New leadership appointed to State Board of Equalization

The Stand opens in Pasadena