Officers with the Los Angeles Police Department’s Hollywood Division shot and killed a suspect on Tuesday who allegedly stabbed multiple people at a fast food restaurant near Sunset Boulevard and Ivar Avenue. 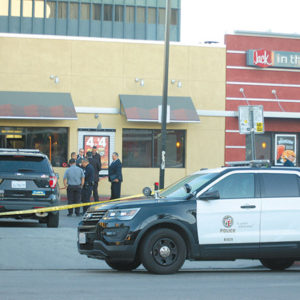 Police cordoned off the Jack in the Box restaurant in Hollywood while they investigated the stabbings and officer-involved shooting. (photo by Gregory Cornfield)

LAPD spokesman Sal Ramirez said police received a 911 call at approximately 2 p.m. about a stabbing near the intersection. Officers arrived and located a suspect in a Jack in the Box restaurant at the northeast corner.

“They got there to the Jack in the Box and observed a suspect stabbing victims, and the officer-involved shooting occurred,” Ramirez said. “The suspect was killed.”

Los Angeles Fire Department spokeswoman Margaret Stewart said three male victims suffering stab wounds were taken by paramedics to a hospital. Two were in critical condition, while the other was in fair condition. A female victim was also slightly injured. Paramedics treated her at the scene and she did not require hospitalization, Stewart said.

LAPD spokesman Jack Richter said on Wednesday that all of the victims are recovering and are expected to survive. He said authorities were not able to identify the suspect, who is believed to be a transient in his 30s or 40s. The motive is unknown. Police do not believe the suspect knew the victims.

“We have yet to figure it out. It appears it was random acts,” Richter said. “We are really fortunate that the officers were nearby at that time.”

“I want to thank the Los Angeles Police Department for responding in seconds, and stopping the assailant from harming even more people,” O’Farrell said. “Our prayers are with the three victims who are expected to recover, and anyone affected by this incident. We must all be vigilant, wherever we are, at all times.”