A residential building on Formosa Avenue was demolished on Jan. 21 even though a city councilman had requested a stop work order to verify the legality of the demolition.

Tenants of rental units at 1332-1334 N. Formosa Ave. had been evicted last year through the Ellis Act by the property manager, Wiseman Residential. Six of them alleged in a lawsuit filed on Jan. 3 in Los Angeles County Superior Court that Wiseman had been renting their former units through Airbnb, which would violate a provision in the rent stabilization ordinance that regulates how quickly units can be re-rented. 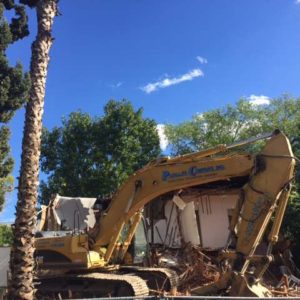 A stop work order was posted on a fence outside the property the day before its demolition, but the city’s Housing and Community Investment Department (HCID) reinstated the demolition permit on Jan. 30. The vacated property was in compliance with the Ellis Act, according to HCID, and the allegations by residents were not sufficient under current law to withhold the permit.

The motion asks for the city’s Housing and Community Investment Department (HCID), the city attorney and city council to “review and determine whether a policy may be adopted to not issue a clearance for demolition under the Ellis Act, while there are pending investigations for violations of the Ellis Act, [rent stabilization ordinance] and/or other [Los Angeles Municipal Code] codes.”

“It has been reported that landlords and developers are taking advantage of the time between when tenants leave an Ellis Act building and when the buildings are converted to for-sale housing, to re-rent as short term rentals – a violation of both the Ellis Act and current zoning codes,” Ryu’s motion reads. “Developers should not be able to reap the benefits of the Ellis Act while simultaneously violating its other provisions.”

Richard Koehler has lived on Formosa Avenue for 15 years in a building also managed by Wiseman.

“If that passes, that’s a win in the battle against shady developers,” he said of Ryu’s motion.

Koehler and a neighbor, Jianna Maarten, who has lived on Formosa Avenue for 12 years, have both received Ellis Act eviction notices from Wiseman. Maarten said Ryu’s motion is “one step,” but she’s also frustrated that current law did not allow residents’ allegations to postpone demolition.

“It’s really puzzling to me,” she said. “This is why people have lost faith in their local government.”

Benjamin Cohanzad of Wiseman has denied that the units at 1332-1334 N. Formosa Ave. were being rented via Airbnb after the tenants vacated. He said via email the accusations from residents are “all lies to make us look bad.”

“All we are doing is conducting business and providing much needed housing to the city,” he said. “But if the city doesn’t want that, we have no problem stopping. It will not hurt us, since rents will just become more and more expensive. It will hurt the renters and not the landlords.”

Andre Dubois had been living in one of the units at 1332-1334 N. Formosa Ave. with his girlfriend Sonja Durham, who is named as one the plaintiffs in the lawsuit filed against Wiseman, Airbnb and Belmond Homes LP, which has owned the property since February 2016. They received eviction notices and left their unit last summer.

Dubois and Durham coauthored an email to Ryu saying they “trust [Ryu’s] vision for the future of Los Angeles” while imploring him to continue taking steps to prevent similar situations.

“What will be your legacy?” the email read. “Did you not take the oath to serve and protect us Angelenos and for those who can’t speak for themselves? Can you hear our voices, can you see the tears and can you feel our despair? We stand in solidarity with our neighbors and anyone going through this.”

Builders dig in to comply with rules in Beverly Grove