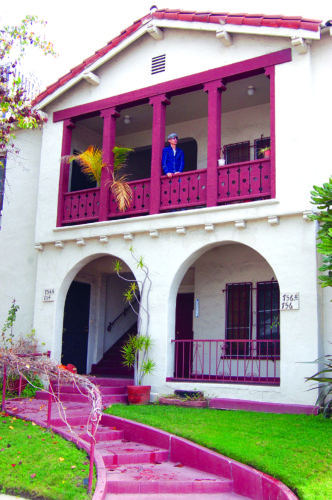 Rudy Calvo stands outside of his apartment, where he has lived for 23 years. In December, the planning commission voted to exclude his building from the proposed HPOZ.
(photo by Gregory Cornfield)

Rudy Calvo, 63, has been living in the 700 block of South Orange Grove Avenue in the Miracle Mile for 23 years.

His family moved to Los Angeles from Costa Rica in 1959, and he attended John Burroughs Middle School and Fairfax High School. He worked for a while at the former May Company building near Wilshire Boulevard and Fairfax Avenue.

“This neighborhood is pretty much my entire life,” he said. “What attracted me to the area was the architecture and the beautiful buildings. In America, there isn’t an appreciation for architecture, and no love for the structures.”

After he was diagnosed with Parkinson’s Disease in 2007, Calvo – who was a makeup artist for 35 years in the entertainment industry – was forced to back away from his job. He said without rent controls in the city, he does not know what he would have done.

“Thank God for rent control,” he said. “It has allowed me to stay afloat.”

On the days when his disease restricts his mobility, he isn’t completely home-bound thanks to the configuration of the Miracle Mile.

“Everything here is within walking distance,” he said. “One of the things I really appreciate about the neighborhood is taking walks along Eighth Street and looking at the structures. This neighborhood is very special to me.”

But now, Calvo and other supporters of the Miracle Mile HPOZ are worried they will miss out on protections for their homes.

In December, the Los Angeles Planning Commission voted to approve the Miracle Mile HPOZ after the commissioners decided to exclude properties that are north of Eighth Street, as well as properties fronting Olympic Boulevard and other structures – including the one Calvo lives in – on Orange Grove Avenue. According to the Miracle Mile Residential Association (MMRA), nearly 500 rent-stabilized units were excluded from the new HPOZ boundaries – which will next be considered by the city’s Planning and Land Use Management (PLUM) Committee.

To the planning commission, the decision to alter the HPOZ boundaries was about planning for anticipated density on a major thoroughfare as the Purple Line Extension makes its way west along Wilshire Boulevard. To the residents of the Miracle Mile, the decision to reform the boundaries was the city turning its back on tenants and the affordable housing crisis, as many of them believe that after the interim control ordinance (ICO) expires in March – which provides protections from developers building larger, out-of-scale homes – they will be vulnerable to eviction. To leaders of the MMRA – who initiated the effort to establish an HPOZ years ago – a vote to sustain the new HPOZ boundaries is a vote for homelessness.

The group is rallying neighbors to call on Councilman David Ryu, 4th District, to return the HPOZ to its original boundaries before the city council can vote on it. The MMRA and residents in the now-excluded rent-stabilized units sent a letter to Ryu to ask “why he has abandoned his vow to protect affordable, middle class and workforce housing.”

“Our exclusion will mean that developers will soon be evicting us from our homes to continue the demolition of our historic neighborhood to make way for luxury market-rate apartment complexes,” the letter read.

Jim O’Sullivan, Ken Hixon and Greg Goldin, who are board members of the MMRA, said they believe the HPOZ is encroaching on Mayor Eric Garcetti’s “master plan” to densify the transit corridors with market-rate or luxury housing. But whatever the motive was, the MMRA said those renters will face imminent eviction if their apartments lose HPOZ protections.

Hixon explained that 70 percent of Miracle Mile residents are renters, and the proposed HPOZ includes more multi-family structures than any existing HPOZ in Los Angeles.

O’Sullivan said that the MMRA has been exploring preservation options for years. He explained that the influx of McMansions was the catalyst for their efforts to preserve the neighborhood, but they learned that other reforms would only apply to single-family structures. And after the establishment of the ICO, O’Sullivan said they started to realize the unique architecture in the Miracle Mile and determined that an HPOZ was the best tool to fit the mix of renters and owners.

“It’s not about political boundaries,” O’Sullivan said. “It’s about the historical cohesiveness.” 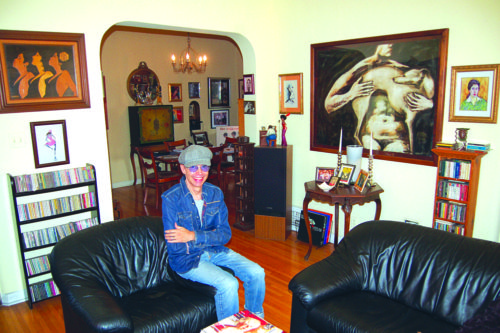 Calvo has lived in his apartment in the Miracle Mile for 23 years.
(photo by Gregory Cornfield)

O’Sullivan said Ryu has been a consistent advocate for rent controlled housing. But he’s afraid the councilman will not speak up to save the 500 units if Ryu believes one of his colleagues on the city council will vote against him, as he will need nine other members to vote with him to override the planning commission’s decision. O’Sullivan said they won’t take that as an excuse.

Dozens of residents went to Hixon’s home on Monday to ask questions about the HPOZ with Ryu’s deputy Julia Duncan. Residents said they don’t have faith in “Spring Street,” and said they want Ryu to save the units.

Ryu sent a letter this week to Miracle Mile residents asking for input on the HPOZ.

“The ICO was established to, ‘prevent the further alteration, demolition and redevelopment of properties in this unique neighborhood,’ while the HPOZ was being formed for long term protections,” the councilman explained in the letter. “Implementing one of Re:Code LA’s 16 newly created single family zones as an alternative solution to neighborhood protection has been discussed. This solution would only be applicable to single family zones, not multi-family, and only relates to mass and scale, not architectural styles. The ICO is set to expire in March 2017 and cannot be extended. … An HPOZ affords additional protections for architectural cohesiveness as well as protections to the affordable and rent stabilized multi-family units.”

In an interview on Wednesday, Ryu emphasized that he has fought to preserve rent-stabilized units and historic structures throughout the city.

“At the same time, I’m very supportive of community input,” he said.

Throughout the years-long process, Ryu said misinformation has been spread from both opponents and supporters of the HPOZ. He said residents have called his office to say the HPOZ is too restrictive and will ruin their livelihood, just as people have called to complain about the excluded rent-stabilized units. With the letter to residents, and an extended period to submit comments to the city, he hopes to learn what the community truly wants. Then, he will be able to determine his next move.

“My goal has been trying to figure out fact from fiction,” he said.

Additionally, he said he needs to confirm claims about the amount of units that are being excluded under the new boundaries.

Ryu said the PLUM Committee has not yet scheduled a time to consider the HPOZ. If it advances to the full city council, he would need nine of his colleagues to vote with him in order to override the recommended boundaries from the planning commission.

Today, at the Greater Miracle Mile Chamber of Commerce event, Ryu is scheduled to speak and both supporters and opponents of the HPOZ are expected to attend the event at 11:30 a.m. at the El Rey Theatre, located at 5515 Wilshire Blvd.

Calvo said he hopes the MMRA can do enough to convince Ryu to fight for the original boundaries to preserve the architecture of the neighborhood.

“Without our past, what do you have?” he said. “Sure, you can knock it down and put up a Walmart, or the subway, and there’s really no appreciation for the history. … I count my blessings everyday I’m living here.”

Long time residents in Miracle Mile are at risk for displacement with this last minute change in the boundaries. The sales of properties to developers will happen very quickly because as one goes up it absolutely destroys the attractiveness of the building next door to people who want to live in a vintage apartment. Then that guy wants to sell, now at a value below what it was a year ago. If this stands those buildings on the contested blocks are sitting ducks.

This is no different than McMansionization and we all remember how quickly that spread, before the emergency Interim Control Ordinance went into effect. Forget about how many of these people will end up homeless, for a minute. Think about the ones who will find shelter. Imagine where someone who has lived in a rent-stabilized apartment for 30 years ends up.

Mr. Calvo’s story hit home. Three such long-term residents lived in the buildings next door and would sit on the wall in front and talk to us. They became more than our neighbors they became our friends. They would bring in packages when Amazon would leave a delivery during the day. They would tell us stories about the famous people who lived on the block and down the street. We all had keys to their apartments in case something happened so we could go in and help them. They set an example for how to be good neighbors.

They have passed on now but we know their lives would have been totally ruined if forced to move away from their friends and this beautiful neighborhood at their age and on a limited budget. That would be a special kind of hell, alive but dead.

To think that a group of these neighborhood treasures could be gone in a flash is depressing. A neighborhood is more than just the structures. If the new boundaries are left to stand property owners will be hurt, renters will be hurt and for what, so that real estate agents can make a few more bucks flipping properties in an area under attack. These are the same people who went out last fall and told homeowners they could not change paint color or put in drought tolerant landscaping. Alternative facts before they became a thing.

The McMansion on Ridgeley, the one that sent off alarm bells in Miracle Mile, keeps changing hands because it seems no one wants to live there. I see the new building on Ogden near the gym sit dark every night because half of the units are still vacant a year after it opened.

As a community we need to think these things through. Put the density in on the major thoroughfares where it belongs and do it the right way, with community input. Displace a parking lot not a historic neighborhood. Keep in mind that the low-income units that are set aside in the new mega developments have a catch. They sunset out after 30 years and can go to market rate rents. Highland Park is dealing with this now.

Los Angeles has Very rich diverse history which can be experienced by seeing the local architecture from times gone by. The rent controlled living spaces are disappearing at an alarming rate, and forcing many people into the streets. I am also a victim of greedy developers pushing tenants out in order to make more money. Many new structures have illegally illiminated affordable units from their buildings, even though their building permits were granted on the basis of their compliance to provide such units. Please do not let this dangerous trend persist. There are thousands of displaced tenants like me forced to sleep in their cars, or on the couches of kind friends, because the drive to make money has skyrocketed the rents out of reach of working class families, and individuals who were excellent renters, who paid their bills on time.