Firm returns after years of litigation over Metro Red Line 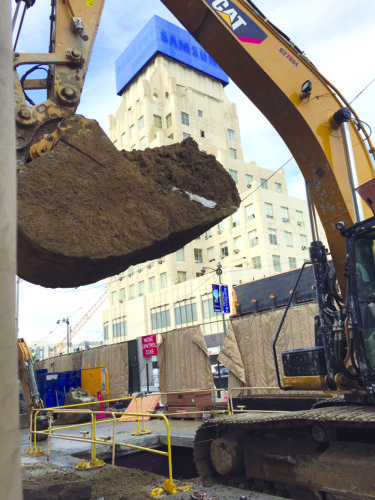 Above, work continues on the first section of the Purple Line Extension near the intersection of Wilshire Boulevard and La Brea Avenue, with crews from Skanska-Traylor Shea. The Metro Board approved the contract for the second section with joint venture Tutor Perini/O & G.
(photo by Gregory Cornfield)

The Los Angeles County Metropolitan Transportation Authority (Metro) Board of Directors on Jan. 26 voted 8-0 to approve a $1.37-billion contract bid by Tutor Perini/O & G to build a 2.6-mile section of the Metro Purple Line Extension through Beverly Hills.

Metro staff’s recommendation for Tutor Perini – led by chief executive Ron Tutor – is based largely on the firm’s bid price, which was approximately $500 million lower than the second lowest competitive bid. And despite Tutor’s history with Metro – which includes one of the longest and most expensive legal battles in the agency’s history and an illegitimate claim ruling for Tutor’s firm – the board unanimously approved the recommendation.

Before the vote, former Metro Board member and Los Angeles County Supervisor Zev Yaroslavsky said he hopes the board made sure they were voting on a credible bid. Yaroslavsky said Tutor’s reputation is to bid low to win contracts and then to submit change orders to make up for it during construction.

Metro director Jacquelyn Dupont-Walker asked Tutor at the meeting how he was able to bid so far below the second lowest bid.

“That must have come to people’s attention,” Tutor said at the meeting.

“It’s really pretty basic. Many of you weren’t here when the system started in 1985 and I was. Our company did 21 of the first 26 projects – 10 stations and four tunnels – start to finish. We never had a dispute until the Wilshire-Normandie station, which we all know about.”

The legal conflict began in the mid-1990s when Tutor alleged that Metro refused to pay out claims involving stations on Wilshire Boulevard. In 2006, a Superior Court jury dealt Metro a victory after finding Tutor’s firm in breach of contract for work at the Wilshire-Normandie station. Tutor’s firm completed the third section of the Red Line to North Hollywood within the project’s budget, and all litigation with Metro has since been resolved.

On Jan. 26, Tutor argued that there was never a question with the quality of work that his firm completed. And he said he is happy with the firm’s bid for the Purple Line Extension.

“We bid the job based on our knowledge of what it cost. We pulled out our cost records. I personally supervised the estimate,” Tutor said. “Nobody likes to be a $450 million low bidder. But I think the single biggest difference is our peers, who are excellent who bid against us, have never finished a job in the Los Angeles subway system. We’ve built most of the system. We know what it costs us. That is the true value of the work from our perspective. We’ve cross checked until my eyes crossed.”

Board member and Glendale Mayor Ara Najarian said he doesn’t see any other bid “coming close to the Tutor proposal.”

“Yes, there has been litigation in the past,” he said. “But there comes a time when those issues are closed and we have to move on.”

In evaluating the bids, Metro staff concluded that the proposal from Tutor Perini/O & G received the lowest score to build and manage the project. But “best value” is determined by a formula based on price, features, functions, life-cycle costs and other criteria. According to the staff report, “project management” is weighted at 45 percent, “technical approach” is weighted at 20 percent and price is weighted at 35 percent. Metro’s staff recommendation is based on the firm’s competitive proposal of $1.37 billion, which is approximately $500 million lower than other competitor bids.

Earlier in January, Metro announced that the federal government agreed to allocate $1.2 billion in new grants for the Purple Line Extension. With Measure R and Measure M funds, $2.4 billion is now designated for the project.

At the press conference on Jan. 4 in Century City, Mayor Eric Garcetti and Los Angeles County Supervisor Sheila Keuhl, 3rd District, credited the approval of Measure R and M for persuading federal officials that Angelenos want more public transportation. According to Metro officials, without the funds from the county measures, Metro would “almost certainly not” have received the federal funding.

More than 71 percent of county voters approved Measure M on Nov. 8, agreeing to a half-cent sales tax increase. According to contribution reports, Tutor Perini contributed at least $200,000 to the campaign in November. (The two other firms with competing bids, Skanska and Walsh-Shea, also contributed similar amounts to the ballot measure campaign.)

For decades, Tutor has invested in political campaigns throughout California, such as for former Mayor James K. Hahn, whose election meant he could take a seat on the Metro Board. More recently, Tutor Perini has contributed to campaigns for Mayor Eric Garcetti in 2013, who is Metro Board vice chair, as well as at least $50,000 to the 2017 Measure H, championed by Supervisor Mark Ridley-Thomas, who is also on the Metro Board. (Walsh-Shea has also contributed similar amounts to the Measure H campaign.)

Metro intends to implement a strong oversight plan to ensure the project is completed as intended and remains on time and on budget, including implementation of a pilot program to resolve project claims and changes.

To minimize the amount of time delayed by change orders, the Metro Board for the first time gave Metro CEO Phillip A. Washington authority to approve change orders up to the marked budget of $2,440,969,299. Any change that results in an increased budget would then require board approval. 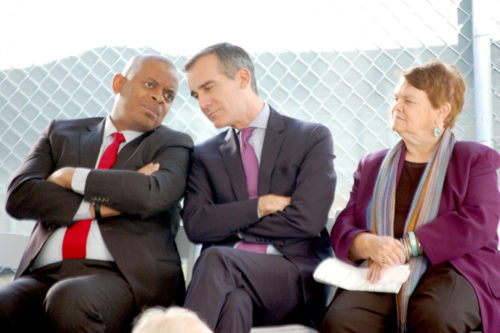 From left, former U.S. Secretary of Transportation Anthony Foxx, Mayor Eric Garcetti and Supervisor Sheila Kuehl convene in Century City on Jan. 4 for the announcement that the federal government agreed to allocate $1.2 billion for the Purple Line Extension.
(photo by Gregory Cornfield)

“The change order process is one that we keep a very close eye on now,” Washington said last week.

In a statement after the vote, Washington said Metro is confident in the contract with Tutor Perini.

Beverly Hills last week started preliminary negotiations with Metro for the construction of the project. Work is allowed to continue while a supplemental Environmental Impact Statement is being prepared.

Metro will hold a community meeting for section 2 of the Purple Line Extension at 6 p.m. on Thursday, Feb. 2, at the Century Plaza Towers, located at 2029 Century Park East, in conference room A on concourse level D.

Metro will also hold a community meeting on the same topic at 7 p.m. on Thursday, Feb. 9, at Beverly Hills City Hall, located at 455 N. Rexford Dr., in the Municipal Gallery.

Completion of the second subway section is anticipated no later than 2026, and Metro is aiming to finish the project at an earlier date.

A third and final section will extend the subway to the Westwood/VA Hospital. Construction of the third section is planned to begin as early as 2019. Metro is now building the first section of the Purple Line Extension between the current subway terminus at Wilshire/Western and Wilshire/La Cienega with three new stations. Skanska-Traylor-Shea is the joint contracting venture for the first section.