Batman returns in his best work since “The Dark Knight.” Unlike last year’s embarrassing battle between Bats and the Man of Steel, or even the lackluster finale to Chris Nolan’s “Dark Knight” trilogy, “The LEGO Batman Movie” is a caped-caper we need right now, an epic adventure that draws upon decades of comics and transmedia material.

A spinoff of “The LEGO Movie,” we find the World’s Greatest Detective back in Gotham City, fighting all the familiar supervillains. Batman (voiced by Will Arnett) loves playing the hero, the lone vigilante. But that won’t fly with the new Commissioner Gordon, Jim’s daughter Barbara (Rosario Dawson), who wants Bats to work with the police department. 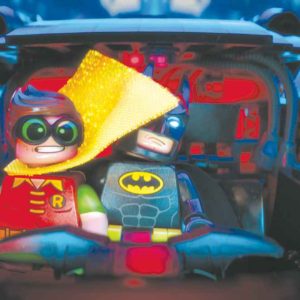 Will Arnett provides the voice of Batman and Michael Cera is the voice of Robin in “The LEGO Batman Movie.” (photo courtesy of Warner Bros. Picture)

He also faces more trouble among the villain crowd. His nemesis the Joker (Zach Galifianakis) takes things rather personally when Batman says he doesn’t care about the Clown Prince of Crime enough to even say, “I hate you.” That won’t do for comics history’s best hero-villain bromance, so Joker develops a truly maniacal plan, one that threatens the safety of everyone in town.

“LEGO Batman” is easily a top five Batman film. In place of every other brooding Dark Knight, we encounter a caricature of the character, a tool aware of his social currency in pop culture. As the billboard says, “Always be yourself. Unless you can be Batman.” He’s one of the most popular characters, if not the top dog. Who wouldn’t wanna be Batman? Considering most people can’t make it through a single Crossfit class without collapsing, let alone fight dozens of criminals at a time all through the night, the idea lacks a practical allure.

But this Batman, residing in a world of pure imagination, who takes down all his greatest foes while singing a metal theme song he makes up on the spot, is the Demon of the Night without all that tedious, gritty stuff. He’s always in charge, to laughable results, without channeling any 1960s camp, though the Adam West years get a few name drops.

The LEGO universe is two-for-two with a third installment on the way this fall – “The LEGO Ninjago.” Shared universes are the new normal on the big screen. Certainly that can lead to some shameless cash grabs, but for now LEGO is a name with some weight behind it.

It’s the humor. Unlike some rather juvenile entries by DreamWorks Animation and even a few Pixar ones of late, the jokes here are best received by seasoned moviegoers familiar with the characters on screen. Yes, kids will have plenty to experience between the high-octane action and verbose gags, but others can locate the joys hiding in a richly detailed story.

Arnett, the comedic genius behind “Arrested Development’s” G.O.B., doesn’t look like Batman. But that voice is spot on. Now, if you’re after the best vocal talents for the character, look no further than Kevin Conroy, the voice of Batman on countless animated projects and video games dating back to the 1992 TV series. He’s the pitch-perfect voice of the character, while Arnett is the splendid, over-the-top iteration. 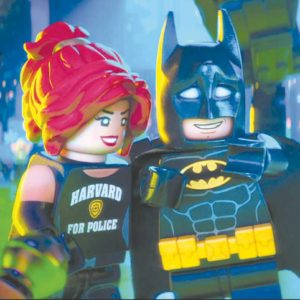 The rest of the voice cast is a sight to behold as well. Billy Dee Williams reprises his role as Two-Face, the character he played in Tim Burton’s “Batman.” Zoë Kravitz, a huge fancast for the character, takes on Catwoman. Channing Tatum and Jonah Hill return as Superman and Green Lantern. Conan O’Brien even shows up as the Riddler, and Jemaine Clement is Sauron. Yes, that Sauron.

Galifianakis as the Joker is a recipe for jokes. Channeling Bradley Cooper’s Rocket in “Guardians of the Galaxy,” however, it’s difficult to isolate that Galifianakis sound. It doesn’t matter; he’s the man for the job.

While the voice cast is something fun to highlight, the real hero is first-time feature director Chris McKay, who made his name directing and producing “Robot Chicken.” He knows his way around the most ADD superhero film to date. As for the writers, with all five listed including Seth Graham-Smith (author of “Pride and Prejudice and Zombies”), it only makes sense to have such a large team to leave no stone of Batman history unturned. Batman deserves no less than the extreme reverence and wild ride that occurs here.

Mayoral candidates convene at forums, minus the mayor