A breach of contract lawsuit filed in Los Angeles County Superior Court against the Beverly Hills Unified School District and ProWest Constructors, a district contractor, is tentatively set to be dropped next week, according to an attorney for the plaintiff.

The complaint was filed on Jan. 31 on behalf of plaintiff M-N-Z Janitorial Services, located at 2109 W. Burbank Blvd. The company served as a subcontractor of ProWest, located at 22710 Palomar St. in Wildomar. M-N-Z alleged that it was paid only $21,175.50 after completing work last summer at Horace Mann School, one of the district’s K-8 schools, under a contract valued at $182,200.46. 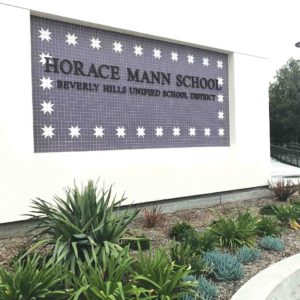 La Tanya Kirk-Carter, the district’s chief administrative officer, said the district has spoken with ProWest and the matter has been resolved. Martin Fox, a partner of the law firm Bleau Fox who filed the complaint on M-N-Z’s behalf, said both sides had a tentative agreement in place to resolve the issue out of court.

ProWest has been working for the district since July 2014 as a general contractor for construction at Horace Mann School, according to the complaint.

ProWest awarded M-N-Z a subcontract for cleanup services at Horace Mann valued at $41,040, according to the complaint. The work included cleanup of the school’s basement through its second floor and the parking lot. M-N-Z completed the initial scope of work from June to August 2016, the complaint states.

A September 2016 change order to include a broader scope of work increased the value of the contract to $182,200.46, according to the complaint. After completion of the work, M-N-Z said it had not been paid the outstanding $161,024.96.

“Both ProWest and the school district have unjustly retained the benefit of the cleanup services rendered at the expense of M-N-Z,” the complaint read.

M-N-Z issued a notice to the district on Nov. 4 stating that it had received $21,175.50 for completed work specified in the subcontract, including additional work from the change orders, and requested that the district appropriate the remainder of the contract value.

The complaint also named Hartford Fire Insurance Company, of Hartford, Conn., as a defendant. Hartford acted as a surety for ProWest on the project, meaning Hartford would be responsible for the full value of the contract if ProWest defaulted, according to the complaint. The company did not return a request for comment before press time.

Horace Mann, which first opened in 1929, was being renovated through funding from Measure E, which was approved by voters in 2008 and allows the district to issue $334 million in general obligation bonds to upgrade the district’s schools.

Horace Mann’s main building reopened last August after excavation and construction dating back to 2014. Each classroom had been outfitted with a 70-inch touchscreen, a moveable and wireless LCD TV and a projector that uses an infrared field to make the projection a touchscreen. It also has a new 90-space underground parking lot.

As of the beginning of this school year, Horace Mann was awaiting completion of an all-purpose room, construction on the east side of the campus and a sports court.