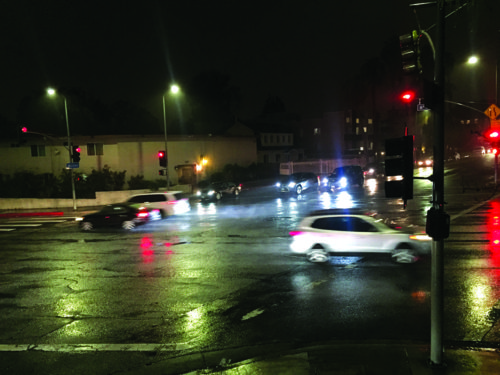 Motorists drive through the intersection of Sixth Street and Wilton Avenue on Tuesday, despite the light turning red.
(photo by Gregory Cornfield)

For drivers and pedestrians, one of the most dangerous places to be in the country is on the streets of Los Angeles.

For years, Los Angeles has been the car accident capital of the country. According to the Los Angeles Department of Transportation (LADOT), the city experiences more traffic fatalities per capita than any other city in the United States. Approximately 260 people died in traffic accidents in Los Angeles in 2016, and motor vehicle crashes are the leading cause of death of children between ages 5 and 14. For perspective, in 2013, there were more traffic deaths in the city than gang-related homicides.

“Every 40 hours, a person is killed in a traffic collision in Los Angeles. Nearly half of the people who die on our streets are people walking and bicycling,” wrote Mayor Eric Garcetti in an open letter.

But by 2025, Los Angeles hopes to eliminate traffic fatalities completely. Two years ago, Garcetti set the goal to reduce traffic fatalities by 20 percent by the end of 2017, with the ultimate goal of eliminating traffic deaths by 2025. On Jan. 26, the city revealed how it plans to achieve those goals, when Garcetti and LADOT released the city’s first Vision Zero Action Plan, which includes strategies – including new street designs, education programs and enforcement strategies – they hope will reverse the deadly trends.

“Traffic deaths are not inevitable,” Garcetti said in a statement. “We can work together to keep people walking, biking and driving out of harm’s way – and the Vision Zero Action Plan is a blueprint for making our streets safer for everyone, no matter how they get around the city. The strategies in our plan can save lives.”

According to the plan, Los Angeles will “not be complacent about the tragic loss of human lives on its streets.”

Angelenos have become accustomed to those drivers who routinely fly through intersections on Friday afternoons to “beat the light,” and it has become commonplace to see a line of three to four cars creep forward from the left turn lane after the light turns yellow, often risking the safety of other travelers or pedestrians. But changing that behavior could lead to significant improvements.

The plan explains that a one-size-fits all solution does not exist. But city staff studied best practices to identify proven solutions.

For example, left-turn restrictions may be explored in locations where those turns have caused collisions. According to LADOT, turning movements at traffic signals account for approximately 20 percent of fatal or severe pedestrian and bicycle collisions. Left turns account for nearly twice as many collisions as right turns.

The installation of a scramble crosswalk at Hollywood Boulevard and Highland Avenue is one example of an early win for Vision Zero. Prior to the intervention, Hollywood and Highland was averaging 10 injury collisions per year. In November 2015, a scramble crosswalk was installed at the intersection. It allows people to walk through the intersection in all directions while vehicles are idle.

Six months after installation, there were zero deaths or serious injury collisions.

For years, Los Angeles relied on cameras to catch drivers who run red lights as a way to deter poor driving habits. But studies proved they were not effective in curbing accidents as much as they were in collecting revenue from motorists. The most severe accidents are caused by impairment, distraction and fatigue, which red light cameras cannot prevent. Additionally, an audit by the city controller’s office in 2010 revealed the city was losing more than $1 million per year on the red light camera program. The city discontinued the program shortly after.

The failures of the red light camera strategy led Assemblyman Matthew Harper (R-Huntington Beach) to introduce legislation to prohibit the installation of red light cameras in the state, though the bill failed to gain support.

Transportation departments in California now rely on other more effective measures, such as longer yellow lights or longer intervals when all lights are red. The plan’s list of actions and strategies for the next eight years does not include exploring red-light running mitigation strategies in Los Angeles until 2025.

In Beverly Hills, red light cameras have worked to improve safety and deter violations, according to Lt. Renato Moreno, with the Beverly Hills Police Department. The city installed the cameras nearly 20 years ago, and they are located at 17 traffic “approaches,” meaning multiple cameras at some intersections regulate traffic approaching from different directions.

“The program, when we first started it, was quite successful. We saw a decline [in drivers running red lights] at intersections where they were implemented,” Moreno said. “When people become aware of a camera being there, they become better educated and become safer in general. At some point, everyone knows it’s there and they become safer.”

The fine for running a red light is $490, plus court fees. In 2016, 12,720 citations were issued by the red light cameras in Beverly Hills, according to statistics provided by the Beverly Hills Police Department.

“It’s a deterrent,” said Sgt. Gregg Mader, with the Beverly Hills Police Department. “It alters behavior not just at the intersection, but throughout the city.”

In Los Angeles, cameras with radar to detect drivers traveling faster than the posted speed limit may soon take the place of the red light cameras. According to the Vision Zero Action Plan, vehicle speed is a fundamental predictor of crash survival. A pedestrian’s chances of survival after being hit by a vehicle are increased from 10 percent to 80 percent if the driver is traveling at 20 miles per hour instead of 40 miles per hour.

Scott Epstein, chair of the Mid City West Community Council, said the group is very active on safety projects. One of their biggest priorities is establishing a “road diet” – or reduction of a lane – on Sixth Street to help reduce accidents.

“We have to look at these design solutions – whether it be a road diet or scramble crosswalk. There’s a broad toolbox that LADOT has to work with,” Epstein said.

Leading pedestrian intervals installed at 22 locations, or “pedestrian head starts,” have been shown to result in a 60 percent reduction in vehicle collisions with people walking.

Warning devices, such as a “Stop Here for Pedestrians” sign and flashing beacons, can be useful to guide drivers at complex intersections. High-visibility bicycle treatments at major intersections on the bicycle network can help clearly delineate street space and provide organization that avoids conflict between people driving and people bicycling.

These pairings, called countermeasures in the transportation field, inform project development by helping to evaluate what will be most effective at different locations with varying conditions.

Epstein said he is optimistic that the city can achieve its Vision Zero goals.

“[LADOT has] already made interventions that are already working. I think the question then is, do we have the political will to do these things,” Epstein said. “I commend them for their vision and I’m hoping that our elected officials and community leaders will embrace it.”

The plan will also inform how the city will budget and allocate resources to achieve Vision Zero.

As the city with the most traffic deaths per capita, funding for solutions must match the severity of the problem. In fiscal year 2017, the city allocated approximately $3 million to start the Vision Zero work.

“It is imperative we address this public health crisis and spare more families the misery of lives cut too short. We need better traffic enforcement combined with street designs that discourage speeding. By prioritizing Vision Zero and regularly reporting on implementation progress, we are holding leadership accountable and making a commitment to save lives,” said Los Angeles Councilmember Mike Bonin.

Both the Vision Zero Action Plan and Safety Study and other technical documents can be found at http://visionzero.lacity.org/resources/#documents.

AB 342 is about extracting money from motorists. The tickets won’t carry points, so multiple tickets won’t get unsafe motorists off the street. There’s another bill that will be pickpocketing you, SB 1, which will raise gas tax and registration and is going to an important hearing on Valentine’s Day.

Most of us have heard about the corruption and bribery in Chicago’s red light camera program, where several people were just sentenced to multi years in the Federal pen. But a lot of people dismiss that as part of the way Chicago operates. Here in California, last weekend a story came out about corruption in the red light camera program in Fremont, where city employees hid speed surveys because the 85th Percentile Speeds shown on them would have required the setting of longer yellows at the red light camera corners and the posting of higher speed limits; they substituted surveys supporting shorter yellows and lower speed limits. KPIX had a story Friday night. The source docs are on the highwayrobbery website. Also on that site is a nicely done report by the staff at the San Francisco MTA, which shows that SF’s cameras haven’t made a difference.

What puzzles me is, now that we have ample evidence that it’s for the money, that the cameras don’t work, and that camera companies and cities can and will corrupt the running of the cameras, why does any rational person think that faceless automation should be extended to speed enforcement?