Despite president’s order, L.A. will be ‘sanctuary’ 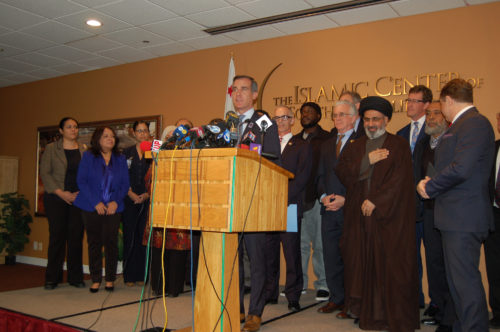 Trump’s Executive Order suspended refugee resettlements in the U.S. for 120 days, and indefinitely from Syria. The order also banned travel to the United States for 90 days by people from Iran, Iraq, Libya, Somalia, Sudan, Syria and Yemen.

“In this hour of darkness and under the cloud of religious persecution, we stand firmly with our Muslim American friends and families,” said Councilman Mitch O’Farrell, 13th District, who organized the meeting. “In the coming days, weeks, months and years if necessary, we will resist any attempt from the Trump Administration or any other entity that threatens the rights of any of us, or the values we cherish most.”

O’Farrell said Los Angeles needs to speak out against policies they disagree with because “silence equals complicity.”

“When we allow any community to be singled out on the basis of fear and paranoia, the civil rights of everyone are compromised,” he said. “We are here to call attention to action at the local level, and support the resistance at the state and national level.”

City Attorney Mike Feuer said he was asked this week what he thought about a recent media poll that showed large numbers of Americans support Trump’s executive order.

“There is only one direct answer to that – that there is still a Constitution in this country. And there’s a reason that those Constitutional values have allowed this nation to be so distinctive for so long,” Feuer said. “And that’s because of the most abiding values that we should hold most dear, include treating people equally, respecting people’s choice to worship as they choose, giving people basic due process.”

Feuer said his office is looking at every step they can take “to defend and protect the values that we stand for and residents of this city.”

“I feel so strongly that this moment right now may be the defining moment in our lives,” he added. “This is the historic moment when the real America needs to rise up and make itself heard.”

Last weekend, protesters gathered at airports across the country, including at Los Angeles International Airport, after reports surfaced that travelers from the seven countries – including legal permanent residents and visa holders – had been prevented from boarding flights, detained upon arrival and questioned about their religion, political beliefs and their views about the president.

On Wednesday, Mayor Eric Garcetti – whose grandfather was a refugee fleeing war in Mexico – talked about the time he spent at LAX with Congress members Ted Lieu (D-CA) and Maxine Waters (D-CA) last Sunday to work with U.S. Customs and Border Protection officials to release detained travelers.

“I wanted to assure them that L.A. will honor a uniquely American tradition by always standing as a place of refuge for people of every nationality and faith,” Garcetti said.

Garcetti described Trump’s executive order as unconstitutional and “absolutely against the laws” established decades ago that stipulate that people cannot be singled out for their nationality as a reason for not letting them into the country. Garcetti said he directed his office to do everything possible to connect people to the legal resources they may need to reach a resolution.

“We must always protect our country and our people from harm, and should take every necessary measure to secure the homeland,” Garcetti said. “But banning people based on religion or country of origin is not only un-American, it is dangerously counter to our national security.”

Board members at the Islamic Center said they are hearing from Angelenos who are concerned that they are going to be separated from family due to the recent action by the president.

Garcetti said no matter a person’s ethnicity, how they worship, whom they love or the language they speak, regardless of age or cultural background, “you belong here in Los Angeles, and in America.”

Lieu, who is the son of immigrants who “achieved the American dream,” said he met with family members of the detainees at LAX and he wanted to protest the “Muslim ban.” Lieu described Trump’s executive order as “offensive” and said it is a “monumental waste of federal resources.”

“Having served on active duty, we are taught that to defeat the enemy, we first need to know our enemy. Our enemies are terrorist groups such as ISIS and al-Qaida, not children, women and senior citizens fleeing those groups,” Lieu said.

“This order contravenes the principles of religious liberty, equality and compassion that our nation was founded upon,” Schiff wrote. “In its discriminatory impact of Muslims, [the Executive Order] also plays into the al-Qaida and ISIS narrative that the West is no place for Muslims and that we are engaged in a war of civilizations.”

On Wednesday, Schiff said the Trump Administration is a “real threat” to California and its future prosperity.

“All [Trump’s] actions concern me greatly,” he said.

He said it’s more important than ever for California representatives to stick together. As ranking member of the Intelligence Committee, Schiff said Trump’s travel ban will be “significantly counterproductive” by making cooperation from Muslim allies more difficult.

“All those things make us less safe,” Schiff said, adding that the biggest problem with terror attacks in the United States come from “home grown radicalism.”

For perspective, Lieu pointed out that the chances of being struck by lightning twice is one in 9 million.

“The chances of being killed by a refugee committing a terrorist act is 1 in 3.6 billion,” Lieu said. “These facts lead me to conclude that Trump’s action is not based on national security, it is based on bigotry.”

Schiff added that he also thinks the executive order will affect long-term relations between communities of different religious or ethnic backgrounds.

“When we enact policies and make statements that we’re at war with Islam, it plays exactly into what al-Qaida and ISIS say. It’s a tremendous setback to our efforts,” Schiff said.

“President Trump’s Muslim ban is unnecessary, it’s unconstitutional and it’s un-American – and it should be repealed immediately,” Feinstein said on the Senate floor. “Sarah Yarjani was one Californian caught up in this mess. She’s an Iranian national studying at the California Institute for Human Science in San Diego under a valid student visa. After being detained at LAX airport for 23 hours, she was sent back to Europe – a clear violation of the nationwide stay against the order.”

Before Trump issued the executive order, Councilman David Ryu – who is an immigrant – hosted the inaugural meeting of the Ad-Hoc Committee on Immigration Affairs.

“I am stunned and overwhelmed with emotion,” Ryu said. “My heart breaks for the millions of people, especially the children who are going to bed afraid tonight. They feel uncertain about their futures – scared they will be torn apart from their families and forced out of the only place they know as home.”

Ryu said he is also angry.

“We have a president who believes in alternative facts. In my family, we call those lies,” Ryu said. “Here is the good news: Los Angeles is and will continue to be a place of refuge for people from all walks of life regardless of one’s background, income, sexual orientation, religious affiliation or immigration status.”

“We are not, as the president claims, murderers, rapists or terrorists. But rather, we are teachers, nurses, firefighters, police officers, lawyers, labor leaders. And some of us are even councilmembers,” Ryu said. “… Los Angeles will not sit idly by as the current administration attacks our immigrant communities. We will speak up against hate, we will resist unlawful acts and we will protect the most vulnerable among us.”

Sixty-three percent of the Los Angeles population is either an immigrant or a child of an immigrant, Garcetti said on Wednesday. O’Farrell added that Los Angeles is home to more people from the seven banned countries than any other city in the country.

“Los Angeles represents something very special for the rest of the United States and the world,” O’Farrell said. “We must always lean against the darkness of ignorance and exclusion and toward enlightenment, tolerance, inclusion and equality.”