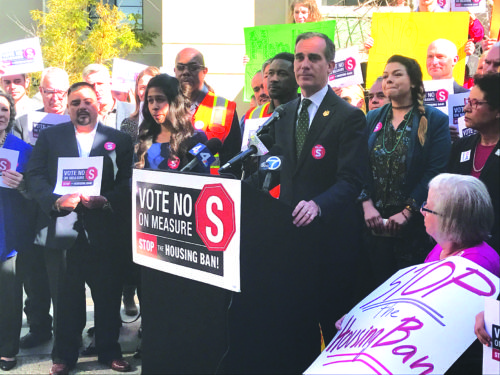 One of the only times Los Angeles resident Jacelyn Valladares said she saw her father cry was when the family had to move from the Echo Park home they had occupied for almost 30 years, after new owners raised the rent from $1,200 to $5,000 per month.

“My family’s home was sold from under them because the city has not built enough housing, and that drives rich people to go after working families’ homes,” she said.

Valladares stood with Mayor Eric Garcetti and members of other community groups on Tuesday, Jan. 31 in downtown Los Angeles to oppose Measure S, which will appear on the March 7 ballot, during a press conference at Casa Heiwa, an affordable housing complex at 231 E. Third St.

Construction of the building required a General Plan amendment, which would be prohibited for two years if Measure S is enacted. Measure S would also place a two-year moratorium on new development that requires zoning changes that increase permitted density or height of buildings, alters land use restrictions, or does not exclusively include affordable housing.

Valladares said the displacement of her family would not have been prevented by the measure, since it was not induced by a General Plan amendment or a zoning change.

“If Measure S passes … if you think the housing crisis is bad now, it’s going to get worse,” Garcetti said. “Rents will rise even more quickly than they are today, and our strategy to move people from the streets into housing will be stopped.”

Measure HHH to approve funding for the housing of homeless people, approved by Angelenos in November, would be inhibited by Measure S because of the restrictions for new construction, he said.

Garcetti also said Measure S would have an adverse effect on the city’s economy.

A report by Beacon Economics – prepared for the Measure S-opposed Coalition to Protect L.A. Neighborhoods and Jobs – claims Measure S “could affect over 24,000 jobs in Los Angeles,” with potential losses of $3.8 billion in economic activity and $1.2 billion in wages.

“The backers of Measure S show up across the city where people are having a hard time, like where seniors were evicted in Westwood,” he said, referring to more than 150 senior citizens living at 947 Tiverton Ave. who received eviction notices on Dec. 1.

Councilman Paul Koretz, 5th District, has since been fighting to keep those residents in their units.

The evictions were issued through the Ellis Act, which was passed in 1985 to allow landlords to exit the rental business by evicting their tenants while also giving them settlements to cover moving and relocation. But Koretz has said developers have been exploiting the act to replace affordable housing with luxury units. A law he supported that provides stricter regulation for Ellis Act evictions went into effect Jan. 25 with the intention of preventing situations similar to the one in Westwood.

Koretz praised parts of Measure S, such as having the city choose environmental impact report consultants instead of developers. But he also said he is concerned about the economic impact, inhibiting new development that includes affordable housing and potential legal challenges.

“I know Measure S proponents and many residents are drawn to the idea of a moratorium and I do think it might light a real fire under the mayor and council’s collective sense of urgency to update the community plans,” Koretz said in a statement. “Thus, I am still mulling over whether supporting the initiative has strategic value along those lines, the other legal questions notwithstanding.”

The Los Angeles County Board of Supervisors approved a motion opposing Measure S during its Jan. 31 meeting.

“While the current system may be less than perfect,” the motion reads, “a change such as that proposed in Measure S – essentially banning new residential multifamily and commercial development – is not the appropriate answer for a time in which the county is attempting to responsibly increase affordable housing.”

In a statement released after the press conference, Jill Stewart of the Yes on S campaign portrayed the campaign against Measure S as a special interest directive.

“Measure S transfers the power to plan the future of our city from the special interest to the public interest,” she said. “So, it’s no surprise that a who’s who of city hall insiders are standing with their biggest campaign contributors, rather than the citizens of Los Angeles.”