The Fairfax High School track and field team could run circles around their competitors with a donation of new running shoes by Sportie LA and the Hoka One One shoe company.

The approximately 50-student team attended a fitting session and pizza party on Feb. 16 at Sportie LA, a sneaker store located at 7753 Melrose Ave., across the street from the high school. Sportie LA co-owner Isack Fadlon, a 1983 Fairfax High graduate, coordinated the donation with Hoka One One and Greenway Arts Alliance co-founder and executive director Pierson Blaetz. The Greenway Arts Alliance is a nonprofit that supports programs at Fairfax High School. 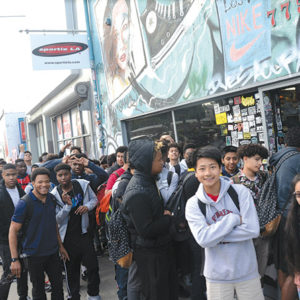 Students from Fairfax High School’s track and field team gathered at Sportie LA on Melrose Avenue on Feb. 16 for a fitting session and pizza party. Sportie LA and Hoka One One donated new shoes to the team.
(photo courtesy of Kim Sudhalter)

Fadlon and Blaetz serve on the board of directors for the Melrose Business Improvement District (Melrose BID). Fadlon was looking for a community partner that could benefit from his connection with Hoka One One, and when Blaetz learned about it, he jumped at the opportunity.

“It’s a good example of how the Melrose BID can benefit everyone on the street,” Blaetz said. “I would have never met Isack if I wasn’t on the board. The BID is doing good work. It’s an example of how businesses in the Fairfax District and on Melrose Avenue are supporting the school.”

Fadlon said he was glad to help, and is looking for other ways to continue the partnership.

“I have an affinity for Fairfax High. I grew up right off Melrose,” said Fadlon, who has operated Sportie LA with his sister since 1985. “This is something where a board and a retailer reached out and gave back to the community. This is not a one-time thing. It’s just the beginning.”

The shoes regularly cost $100 to $150 a pair, which can be a burden for families of many students at Fairfax High School, said coach Shane Cox, who oversees the track and field program. He hopes the donation will make a difference in the team reaching the state championships in late May.

“It’s just awesome all the way around,” Cox said. “A lot of kids just can’t afford them. For a lot of the kids, their regular workout shoes aren’t very good. In a perfect world, we want them to have a better shoe. It’s putting all the kids at Fairfax on par with the private schools. The kids were super excited.”

The students receive the shoes in March, just in time for the beginning of the track and field season. The team competes in distance races, sprint races, relays and throwing and jumping. The competitions include everything from 800-meter and longer races to races that are 400 meters and under. They also compete in shot put and javelin throwing, as well as pole vaulting, long jumping and other events.

Fadlon hopes the donation will inspire other local businesses to partner with the community. Other Melrose BID community programs on the horizon include the “Melrose Mile,” a one-mile run along Melrose Avenue planned in September, he said.

“The joy is seeing the looks on the kids’ faces,” Fadlon added. “Coach Cox and Pierson said it best, it’s about the kids and the community.”

To smoke in Beverly Hills, keep it moving