A 25-year-old suspect has been charged with murder for allegedly killing a clerk during a robbery on Jan. 17 at a Chevron gas station at Los Feliz Boulevard and Vermont Avenue. 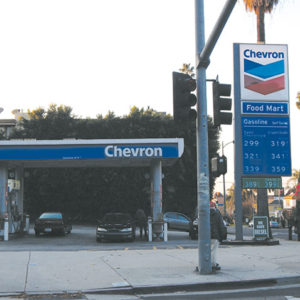 The robbery and shooting occurred at approximately 3:35 a.m. on Jan. 17 at a gas station at Los Feliz Boulevard and Vermont Avenue. (photo by Edwin Folven)

Investigators identified the suspect using security camera footage from the gas station and other evidence that was not disclosed. The suspect, Kayshon Moody, of Los Angeles, was arrested on Jan. 20 after officers pulled him over at an undisclosed location in the San Fernando Valley. Police recovered a firearm believed to be used in the homicide.

Det. Andrew St. Pierre, with the Los Angeles Police Department’s Northeast Division, said Moody was also wanted for a robbery in Glendale that also occurred on Jan. 17. He is allegedly also responsible for a murder on Jan. 18 at a medical marijuana dispensary in the 12400 block of Venice Boulevard in Mar Vista. In addition to a murder charge, Moody faces two felony robbery charges, and will likely be charged for the murder in Mar Vista, according to St. Pierre. LAPD investigators collaborated with Glendale authorities on the case. A second man wanted in the crime in Glendale was arrested on Jan. 23 at an undisclosed location. He was identified as James Eastland, 21.

Moody is believed to have entered the gas station at approximately 3:35 a.m. on Jan. 17. He allegedly shot the clerk and stole a cash drawer. The clerk, identified as Md Mizanur Rahman, called 911 and was taken to a hospital, where he later died. Rahman was a Bangladeshi native and a foreign exchange student.

“We worked a lot of hours on the case,” St. Pierre said. “Things turned up and it worked out well.”