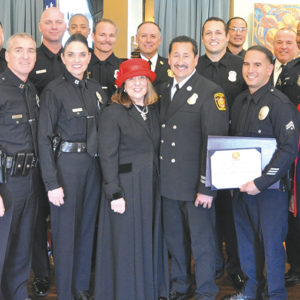 Rodriguez has been with the LAPD since June 2000 and has been assigned to the Wilshire Division for most of his career. He became a senior lead officer three-and-a-half years ago, and serves as a liaison between the police department and the community in neighborhoods stretching from Wilshire to Venice Boulevard, and from Crenshaw to Redondo Boulevard.

Rodriguez said he was inspired to become a police officer while growing up in Huntington Park after witnessing the effect crime can have on a community. He said it is a rewarding job, with a highlight being the relationships he has established in the Wilshire Division.

“I was raised in a violent neighborhood where there were gangs and drugs. I saw a friend stabbed and lost a friend who was murdered. It may sound corny, but it’s why I wanted to be a police officer,” Rodriguez said. “I want to extend my gratitude to Wilshire Rotary and thank them again. It’s not every day your work is recognized. It goes a long way to be recognized by the people who you provide service to. I am honored.”

Ladue, a San Clemente resident, has been with the LAFD for 13 years, and has been assigned to Fire Station 29 for the past 11 years. He said serving the community is his primary focus, and his fellow firefighters and community supporters are an extended family.

“I have been really impressed by how involved the community is with the police and fire departments,” Ladue said. “I think you get to be quite an influence on a community. When you get called out, people open up to you. Even though they are strangers, they know you are there to help. The other side of that is if someone has a problem, you have to fix it. You are a jack of all trades.”

Ladue also thanked the First-In Fire Foundation for its support at the fire station. The organization plans to improve the grounds around the station on Wilshire Boulevard.

Ken Scott, president of the Wilshire Rotary Club of Los Angeles, added that the organization has a long history of honoring first responders and plans to make the ceremony a yearly event.

“We have had a great relationship with the police and fire department in the Wilshire area,” Scott said. “We are proud to honor firefighter Mike Ladue and senior lead officer Hebel Rodriguez for exemplary service above and beyond the call of duty.”