Many people in the community are mourning actress Mary Tyler Moore, who died on Jan. 25 at the age of 80. 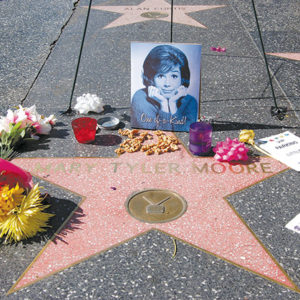 Moore was known for roles in “The Dick Van Dyke Show” and “The Mary Tyler Moore Show,” as well as films such as “Ordinary People” (1980), for which she was nominated for an Academy Award for Best Actress. Moore received seven Emmy Awards for her television roles. Flowers were placed last week on her Hollywood Walk of Fame star at 7021 Hollywood Blvd.

Moore was a philanthropist who was active with many charitable causes, particularly animal rights and the effort to cure diabetes. She was born in Brooklyn and her family moved to Los Angeles when she was 8 years old. She attended St. Ambrose School in Los Angeles and Immaculate Heart High School in the Los Feliz District. 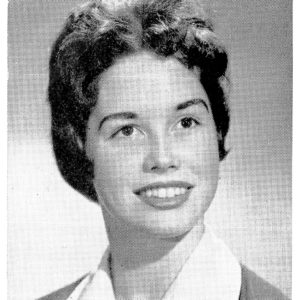 “My goals as a student were simple,” Moore recalled when she returned to her alma mater for the school’s centennial in 2006. “I wanted to be a dancer – despite the cautions of Mother Eucharia (then IH principal) against my wearing short skirts in the school’s musical comedies.”

Immaculate Heart High School also provided Moore’s yearbook photo, which was accompanied in 1955 with her quote, “The world is always ready to receive talent with open arms.”

After graduating from IH, Moore started acting in commercials and gained small parts in television before being cast as housewife Laura Petrie in “The Dick Van Dyke Show” at age 23.

She later starred as Mary Richards in “The Mary Tyler Moore Show,” which aired from 1970-77.

In 1995, Moore published an autobiography, “After All,” about her career and personal challenges, including the loss of her son. Her second book, “Growing Up Again: Life, Loves, and Oh Yeah, Diabetes,” detailed her struggles after being diagnosed with Type 1 diabetes at the age of 33.

“Mary was a television legend, but more than that, in her most iconic role she was both an agent of change as well as a reflection of our changing society,” Carteris said. “At a time when independence for women was not the social norm, both the fictional Mary and the real-life Mary set an example, showing that women could take control of their lives and their careers. She will be dearly missed.”

Always a strong supporter of IH, Moore referenced the school in her acceptance speech for the lifetime achievement award.

“In 1955, I was 18 years old, determined to make my father proud and prove to the sisters at Immaculate Heart High School that I would indeed amount to something,” Moore said.