Builders dig in to comply with rules in Beverly Grove

A new home for sale on Lindenhurst Avenue in Beverly Grove has a subterranean level that is being touted as a way for property owners to comply with anti-mansionization rules while giving homeowners an abundance of space.

The residence at 6443 Lindenhurst Ave. features 4,552-sqaure-feet of space, with more than 1,000 square feet below ground. Approximately two years ago, the city enacted regulations in the neighborhood limiting residential floor area (RFA) for new houses to approximately 50 percent of the lot size. Residents in the area complained that developers were buying homes, razing them and building “McMansions” that sometimes extended to the property lines or loomed over smaller homes next door. 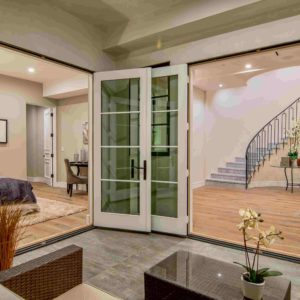 The push for regulations was led by members of the Beverly Wilshire Homes Association (BWHA), who claimed that tearing down older homes and replacing them with new larger residences was ruining the character of the neighborhood. Adding living space in a subterranean level, as is the case with the home on Lindenhurst Avenue, appears to be a compromise that appeases developers and residents.

“As long as we cannot see it and it does not impose on its neighbors, people can burrow down to China and we don’t care,” said Shelley Wagers, a BWHA member who was a former member of the association’s board that pushed for RFA restrictions in Beverly Grove. “In this area, we are largely unconcerned about space below ground because it has no impact on the area.”

A representative of Los Angeles City Councilman Paul Koretz, 5th District, who did not want to be identified, said homes with subterranean levels comply with RFA regulations for the neighborhood, which is located between Fairfax Avenue and La Cienega Boulevard. The only time a subterranean level may be of concern is in hillside neighborhoods where digging could compromise ground stability. Koretz was unavailable for comment.

“Now that regulations are in place, it’s going to change the way things are built,” Schwarz added. “Because there are buyers who want homes this large and it’s such a sought-after neighborhood, builders won’t walk away. Even though it costs a lot of money to go underground, builders are willing to do this to comply with the RFA.”