Group alleges city’s covenant from 1986 was withheld by planners

In October, Los Angeles city leaders commended a compromise that allowed the 8150 Sunset proposal to advance after developers agreed to reduce the height of the tallest structure from 234 feet to 178 feet. However, according to a lawsuit filed last week and a covenant made in 1986, that still might be 133 feet too high. 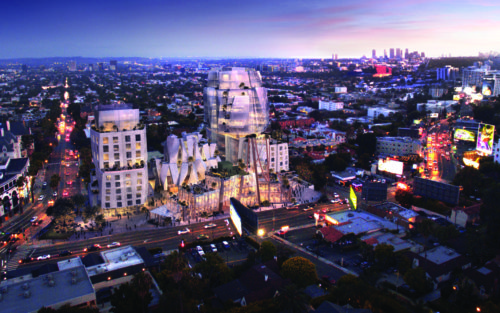 The tallest structure for the 8150 Sunset project is set to be 178 feet. A nonprofit group said a covenant restricts height to 45 feet at the site.
(rendering courtesy of Marathon Communications)

Fix the City ­– a public advocacy group – filed a lawsuit last week alleging that the city failed to disclose a covenant that limits height at the site to 45 feet, among other claims against the project.

The project set for the southwest corner of Crescent Heights and Sunset Boulevards features five structures for commercial and residential space, and will take the place of two commercial buildings and parking space. When the project was considered by the city’s Planning, Land Use and Management (PLUM) Committee, council members said the project’s developer Townscape Partners should be commended for making changes to the project, especially considering there were “no height limits” for the site.

But Fix the City alleges there are height limits, and that the city failed to do what would be necessary to lift the limits. Additionally, the group said the planning department misled the public and city leaders by not disclosing the covenant, established with the development of the existing strip mall.

“Failing to disclose a covenant limiting the site to 45 feet was either sloppy or intentional. Either way, it is unacceptable.” said Jim O’Sullivan, vice president of Fix the City and president of the Miracle Mile Residential Association.

According to the text of the covenant, provided by Fix the City, the restrictions are binding upon “subsequent owners” until a new project is filed with the city, “and the Planning Commission or city council determine that such new or different project is consistent with the General Plan, including the Hollywood Community plan, and the intent of both without such conditions.”

“This covenant and agreement […] shall continue in effect until the Planning Department of the city of Los Angeles approves its termination,” the document reads.

Due to the pending litigation, planning department staff did not comment on the lawsuit. Yeghig Keshishian, a spokesman for the department, and Lucci Ibarra, a senior planner with major projects on Tuesday were able to discuss some aspects and background information for the covenant from 1986. They explained the restrictions are no longer valid because the new project application was submitted, reviewed and approved by the city, thus superseding the covenant.

The covenant established in 1986 stipulates measures that the city can take to alleviate restrictions. But Fix the City contends the city did not complete those measures, and said regardless, the covenant was not included in the project’s EIR.

Fix the City also alleges that the planning department kept the information from Councilman David Ryu, 4th District, who coordinated the compromise with the PLUM committee.

Estevan Montemayor, communications director for Ryu, said on Monday that since there is pending litigation, his office is limited in terms of commenting for this story. But he said Ryu’s office was “never once” informed about the covenant.

He said Ryu and his office are reviewing the documents and the lawsuit this week.

According to a release from Fix the City, it is not known if developer Townscape Partners was aware of the covenant. A spokesman for the firm declined to comment for this story.

In addition to the height restriction, the covenant also stipulates that “new development shall not exceed 30,000 square-feet for a total of 80,000 square feet of development on this site.” Other conditions include restrictions on rooftop signs, delivery times, garbage collection times and more. It also restricts usage of the site. For example, “no auto-repair, automobile related uses, game and video arcades and adult-oriented establishments shall be permitted on the site.”

The lawsuit states that the 8150 Sunset project is located in the Hollywood Fault Zone. In October, Ibarra said city staff confirmed with the Los Angeles Department of Building and Safety that the project is not located on the Hollywood fault. On Tuesday, she said none of that has changed. She also said it’s not out of the ordinary for the city to consider a 3:1 floor area ratio.

Fix the City and the Los Angeles Conservancy also filed lawsuits in December after the project was approved, alleging that the city failed to comply with the California Environmental Quality Act.

“Staff from the Los Angeles Department of City Planning acted as spin doctors for the applicant by concealing information from decision makers and the public,” Fix the City said in the December lawsuit.

Ibarra denied those claims in October.