To smoke in Beverly Hills, keep it moving 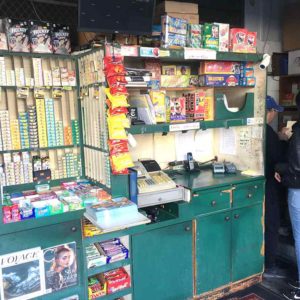 Cigarettes are sold at a newsstand on South Beverly Drive, as well as many other locations throughout Beverly Hills. The Beverly Hills City Council approved new regulations on smoking.
(photo by Gregory Cornfield)

The city of Beverly Hills this week balked at prohibiting smoking tobacco in public, but the city council strengthened its restrictions on smoking on public rights of way and near open-air dining.

Four of the five city council members voted to approve an ordinance that stipulates smokers must be actively passing to another destination to smoke on public rights of way, and that smoking will be prohibited within 20 feet of all open-air dining areas – extended from 5 feet. Vice Mayor Nancy Krasne abstained.

“I won’t tell you when or where to smoke,” Krasne said.

At the Dec. 6 study session, the city council discussed a potential citywide ban on smoking, but it did not have support to pass this week. Krasne said she would prefer to see how the community and businesses in Beverly Hills handle smoking “without us making another law, another regulation.”

Councilwoman Kathy Reims, whose mother died of lung cancer likely due to a life around second-hand smoke, said she had concerns about how the regulations will be enforced, and said it would be “a disaster and a fiasco” to ask the Beverly Hills Police Department to enforce an outright ban on public smoking. She said a proposal to ban smoking is a “non-starter,” and said she believes societal pressures will be more effective at curbing the habit than ticketing people who light up in public.

“As a nation, we need to be embarrassed that we are the largest exporter of tobacco on the planet,” he said. “If you ask me what I really want, I want a planet without tobacco products. Because no one ever has given a positive reason to have tobacco products. It only causes suffering.”

But he stopped short of supporting the full ban.

“It’s a lofty goal for our city. I think we have to get there,” he said.

He said he also was concerned about enforcement, and said the goal is not to give people tickets.

“Quite to the contrary, I would rather our ambassadors hand them a pamphlet on the health risks of smoking,” he said. “But over time, I think we’ll get there. I just have no interest in giving people tickets for smoking.”

He suggested it would be more practical for the city to set a goal that after a certain number of years the city, “will be smoke free.”

Through outreach with the business community, feedback was resistant to expanding the regulations, and stricter rules could lead to a loss of business, especially with the foreign tourists, according to the staff report. Staff also received input from other restaurants that mentioned expanding regulations would not affect business. Hotel owners also expressed concern about strengthening regulations by removing designated smoking areas around pools and outside adjoining areas. They said smoking patrons, especially those from foreign countries, could find the regulations too restrictive, causing them to stay elsewhere.

Mayor John Mirisch, who spent a significant amount of his life in Sweden where smoking is less common, countered and said some foreigners from countries with different habits could also be dissuaded by second-hand smoke. He added that the longer patrons live, the longer they continue to come back and spend money.

According to the staff report, 8 percent of residents in Beverly Hills smoke, compared to 14 percent in all of Los Angeles County and 17 percent nationwide.

Each year, the American Lung Association issues a State of Tobacco Control report, which designates a letter grade to cities on overall tobacco regulations. Currently, Beverly Hills has a “C” grade for not having smoking regulations in multi-unit housing.

City staff anticipate that the American Lung Association would give the city an “A” once a policy regulating smoking in multi-unit housing is adopted, as it is not currently a regulated area. The issue was initially raised in August, when the city council directed city hall to begin the process of crafting policy for smoking regulations for multi-unit housing. Staff anticipates that recommendations and a proposed ordinance will be considered by the city council in April.