A former Firestone tire and service center at the southeast corner of La Brea Avenue and Eighth Street may find new life under a proposal to turn the vacant historic building into a micro-brewery and retail space.

Developer Conroy Commercial has introduced plans for the project and is currently in the process of meeting with neighbors and community stakeholders to gather input about the idea. The project would retain the building’s façade, signage and other exterior features. Conroy Commercial has submitted an application for the project to the city, said Estevan Montemayor, director of communications for City Councilman David Ryu, 4th District. No tenants have been announced.

“We are still at the point where we would like to hear from the community,” Montemayor said. “They sent in an application a few weeks ago for a microbrewery and a small retail component. It sounds like there are some other spaces for restaurants and food. Our position remains the same, for them to meet with the community and hear their concerns.” 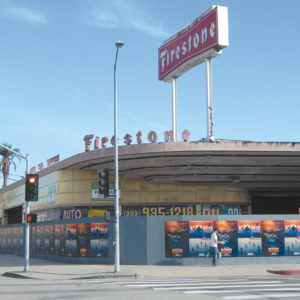 The city designated the former Firestone building as historic because of its exterior features, which are examples of Streamline Moderne architecture. (photo by Edwin Folven)

Representatives of Conroy Commercial did not respond to requests for comment. But many people in the surrounding community are optimistic about the new plan if it does not adversely affect the neighborhood.

“There is definitely some enthusiasm around the idea for the project,” said Conrad Starr, president of the board of the Sycamore Square Neighborhood Association, which is located in the community where the project will be located. “It’s a really cool idea, and our goal is to work with the developers to ensure issues we’ve had about parking and deliveries, and issues about Metro construction in the area are addressed.”

Starr said representatives of Conroy Commercial recently met with Sycamore Square Neighborhood Association members to discuss the project. The association has submitted a list of concerns and is waiting to hear back from the developer.

Jim O’Sullivan, president of the Miracle Mile Residential Association, said he is also optimistic about a neighborhood-serving project occupying the vacant building, but is concerned about parking. La Brea Avenue south of Wilshire Boulevard is becoming a popular dining corridor, and the community will inevitably be impacted, he said.

“I expect as it builds up on La Brea we will be facing issues like they had on Third Street with all the restaurants. There won’t be enough parking,” O’Sullivan said. “There are ways of working around it. If they preserve the interior that would be great. It’s great for a neighborhood when things like this happen, but we will now be dealing with parking.”

The developer is reportedly planning to lease parking spaces in lots nearby and is seeking additional locations for parking. The project must also conform with architectural preservation requirements stipulated by the city, as the building was designated a cultural-historic monument in 2012, said Ken Bernstein, principal city planner with the Office of Historic Resources.

“It appears to be a positive adaptive-reuse of a historic auto service building. We always like to see historic buildings become revitalized and serve community needs, and this appears to be a very positive example,” Bernstein said. “The building was constructed in 1937 and was designated as an excellent example of Streamline Moderne auto-related architecture. Because it’s a historic-cultural monument, they will have to retain significant character-defining characteristics.”

Bernstein said the project will be discussed at an upcoming Cultural Heritage Commission meeting tentatively scheduled on March 2.

“Conroy has worked on numerous properties in this community. It’s exciting to see someone local take a property and go forward with adaptive-reuse,” said Steven Kramer, president of the Greater Miracle Mile Chamber of Commerce. “I look forward to seeing more about this project.”