Windsor Village resident Julie Stromberg was appointed by Assemblyman Richard Bloom (D-Santa Monica) earlier this month to be one of his five appointed delegates to the California Democratic Party for Assembly District 50 during the 2017 to 2019 term.

“I’m honored to have the opportunity to work with him and represent stakeholders in the greater Wilshire area,” Stromberg said.

Bloom will also serve as a delegate. Assembly District 50 reaches as far west as Santa Monica, Malibu and Agoura Hills, and its easternmost territories include Miracle Mile, Hollywood and Mid City. Delegates represent their constituencies at the Democratic Party’s state conventions and regional meetings. 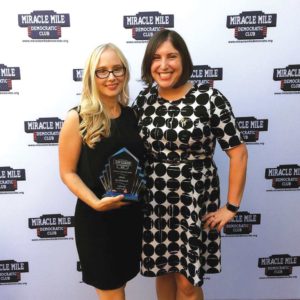 Stromberg, inspired to participate in the California Democratic Party after the outcome of November’s election, was a candidate in a Jan. 8 election at the Santa Monica Library to elect seven male and seven female AD 50 delegates. She ran as a member of the Progressive Slate, which describes itself as progressive Democrats “committed to building the California Democratic Party from the bottom up.”

In a field of 40 female candidates, the 336 ballots cast for her were six shy of the final slot, making her a first runner-up. Elections for the positions are held every two years.

Taking notice of the voter turnout she helped produce from her neighborhood, and in an effort “to be geographically diverse” in his six delegate appointments, Stromberg said, Bloom had his campaign manager interview her for one of the spots.

“Julie is smart, enthusiastic and dedicated,” Bloom said in a statement. “I look forward to her contributions toward strengthening California Democrats and helping us regain ground at the national level in the 2018 election.”

West Hollywood Councilwoman Lindsey Horvath, who was also a Progressive Slate candidate, was the leading vote-getter in last month’s AD 50 delegate election among male and female candidates. She received 435 votes of 1,024 ballots counted.

Horvath also served as a delegate of Hillary Clinton to the 2016 Democratic National Convention, traveling to Ohio and Nevada during the presidential race as well.

“Julie is a compassionate leader whose ability to listen and build consensus will help the Democratic Party heal and move forward in this critical time,” Horvath said. “We are lucky to have her as a member of the AD 50 delegation.”

Stromberg’s community involvement has included roles as board member of the Greater Wilshire Neighborhood Council and its Land Use and Outreach Committee, and member of the Miracle Mile Democratic Club’s board of directors. Stromberg also publicizes events and philanthropic activities in her role as chair of the Ebell of Los Angeles’ public relations department. She is also an attorney, and is married with two children.