The Hollywood Bowl, one of the leading outdoor music venues in the world and the summer home of the Los Angeles Philharmonic, was named the Best Major Outdoor Concert Venue last week at the 28th Annual Pollstar Awards at the Novo by Microsoft at LA Live.

This distinction marks the thirteenth consecutive nomination and award for the iconic venue.

“It’s always an honor for the Hollywood Bowl to be recognized by Pollstar,” said Gail Samuel, Executive Director of the Los Angeles Philharmonic Association. “We take great pride in creating memorable summer nights at the venue and are thrilled that our industry colleagues recognize us for it. So much goes into a Bowl season, and with our presenting partners and the ongoing support of the County of Los Angeles, we look forward to another exciting summer in 2017.” 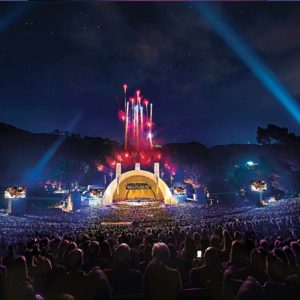 The Pollstar Awards honor the best of the worldwide concert industry. The awards are peer-voted and winners are determined by the international readership of Pollstar.

The Hollywood Bowl has hosted a wide array of artists from various genres throughout the years. The venue’s 2016 season featured performances by Gustavo Dudamel and the Los Angeles Philharmonic, the Hollywood Bowl Orchestra, Steely Dan, Chicago, John Williams, Brian Wilson, Diana Ross and Lang Lang, among others.

The lineup for the 97th season at the Hollywood Bowl will be announced on Tuesday, Feb. 14 at 9 p.m.