You know Oscar bait when you see it, and “Moonlight” hits all the right notes: captivating performances, visionary directing, fabulous cinematography.

Just because it’s bait doesn’t mean we shouldn’t care. Good films present the viewing public with an untold story. Certainly, the idea of a black gay character in a predominantly black community is probable, but its place on the big screen was largely unheard of until now. 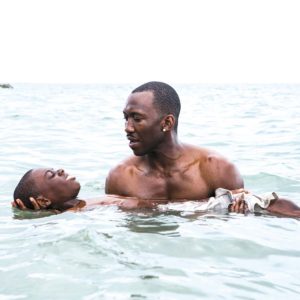 Alex Hibbert and Mahershala Ali give compelling performances in “Moonlight,” which follows the evolving life of a young black man as he struggles to find his way in life. (photo courtesy of A24)

It’s easy to see how “Moonlight” is adapted from a stage play, depicting Chiron’s story in three acts. In the first, he’s known as Little (Alex Hibbert), a young boy picked on because of his size. He’s befriended by crack dealer Juan (Mahershala Ali), who serves as a unique role model, helping him navigate life with his abusive junkie mother Paula (Naomie Harris) and uncertainty regarding his sexuality.

In act two, he’s called Chiron (Ashton Sanders). High school is just as unkind. Life with mother is still difficult, but he finds some joy in his continuing friendship with Kevin (Jharrel Jerome). And in act three, he goes by Black (Trevante Rhodes). By this point in the story, much of his life is defined by the many choices and moments leading up to his adult years.

Very little happens in the actual plot of the film, leaving plenty of room for some incredible performances to take shape. While all three actors who depict Chiron provide a notable evolution of the same character, the standout performance belongs to Ali. Both father figure and drug dealer, he’s a fascinatingly complex figure, likable and infuriating, but never easy to dismiss.

“Moonlight” resists stereotypes at every turn. This is not easy viewing, nor should it be considering the subject matter. For this film, melodrama is the enemy of truth, a cheap ploy that undermines a healthy anxiety. Answers are vague and resolution remains open ended. This can make for a frustrating experience, but hardly something easy to dismiss.

Texas sucks. That’s the real takeaway from “Hell or High Water,” a droning modern-day western that wants to be “No Country for Old Men.” Sure, this is adequate filmmaking, but the high praise surrounding it seems more suited for something with a more profound point.

Banks are ruining West Texas. So Toby (Chris Pine) develops a plan to steal money from a bank chain to save his mother’s ranch with the help of deranged brother Tanner (Ben Foster). They steal from the same bank they owe money to. It’s poetic, the kind of middle finger we all want to give Big Brother. 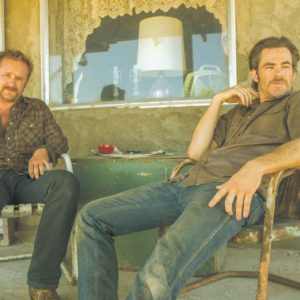 But Texas Rangers Marcus Hamilton (Jeff Bridges) and Alberto Parker (Gil Birmingham) slowly unravel the criminals’ plan and take chase. That’s all the plotline we really get. Most of the film revolves around on-the-nose discussions about the current state of Texas, overly reminiscing about a time long gone in a once great state.

This is a cliche story, but that’s not the point. The primary character isn’t a brother or ranger. It’s West Texas. And West Texas ain’t doing well, overrun by debt and forgetting its once rich history. Every longwinded speech is exploratory, layer upon layer of double and triple meanings. It would be clever if it weren’t so exhausting. For my money though, “Y Tu Mamá También” explores landscape in a much more memorable way.

The real zinger of “Hell or High Water” is the ending. It’s not a spoiler to say a film about bank robbers, regardless of intentions, journeys into a moral haze. But unlike “No Country’s” brilliant final moments, we get some dialogue that clearly highlights the primary issue at hand, fleshing out the story’s moral with the subtlety of a telegraphed scare in a horror flick.

Remember when “Shutter Island” asked, “Which would be worse? To live as a monster, or die as a good man?” Such statements are splendid for an ethics class, but they make things far too simple for audiences. Where’s the pleasure in spelling things out?

“Hell or High Water” isn’t brilliant, but it sure has a lot of people fooled. The “bravery” of material that’s not politically correct might present a realistic Texan vibe, but making people and places seem depressing is hardly the only ingredient needed for a good film. And then there’s Bridges’ reprisal of a western accent. It would be memorable he didn’t bank on it for his awards season currency.