Candidates differ on city planning, but not on love for the Creative City 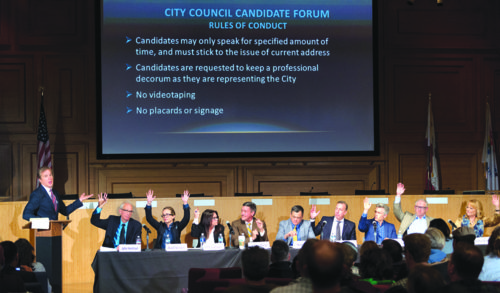 Nine candidates debated how West Hollywood should evolve and grow at a forum hosted by the West Hollywood Chamber of Commerce.
(photo by Jon Viscott)

Based on the rhetoric of the candidates running for two seats on West Hollywood City Council, it is clear the city views itself as a living example of how a city can successfully operate under progressive values.

One month after the city council reaffirmed the city’s commitments to progressive values in response to President Donald Trump’s administration, the candidates for the 2017 municipal election followed suit at a forum hosted by the West Hollywood Chamber of Commerce, and expressed an urgent need to lead the nation as a model for equality.

“Given what happened in the November election, I think it’s very important that West Hollywood remain a beacon of progressive policies,” said Mayor Pro Tem John Heilman, a lawyer and professor who is running for re-election. “And we’re prepared to face the challenges that the next four years will bring.”

Reed Stillwell, who spent much of the last year campaigning for Democratic candidate and former Secretary of State Hillary Clinton, said the new White House administration is a big reason why she is running for a seat.

“I woke up on Nov. 9 knowing that I was going to spend the rest of my life fighting hate and pushing for change, so I’m here,” she said.

Nate Clark, a writer, performer and business owner, said West Hollywood is more than “just a haven” for the “diverse population that we have and have had for 30-plus years.”

“We need to be a beacon for progressive values and we need to set the example – for the rest of the country, for the state of California, for Los Angeles County – we need to be the ones showing the world what a successful, tolerant, diverse community looks like,” he said.

Candidate and business owner Michael Cautillo decided to run months ago, and he said President Barack Obama’s farewell address resonated with him.

“[Obama said,] ‘If you’re disappointed by your elected officials, grab a clipboard, get some signatures, run for office yourself, show up, dive in, persevere.’ … That’s why I’m sitting here before you,” Cautillo said.

Since time had to be shared by nine candidates at the chamber’s forum, opening and closing remarks were restricted to two minutes, and responses could not be longer than 45 seconds. But that didn’t stop the issues of development and city planning from dominating the rest of the conversation. Much of the candidates’ remarks centered around development policy, and questions about social services, traffic and even business licensing were answered with proposed zoning reforms.

“The path that we’re on threatens our way of life and sense of community,” said Cynthia Blatt, who initiated a neighborhood effort in 2015 to curb “overdevelopment.”

Cautillo said the current level of development is exacerbating traffic and parking issues, and he would push for more parking structures around the city.

“And they don’t need to cost $18 million or be automated,” he said, criticizing West Hollywood’s new garage at city hall.

The two incumbents running for re-election – Heilman and Councilman John J. Duran – championed the progress the city has made to get to where it is. Duran, a Los Angeles County native who has lived in West Hollywood since 1990, said development is an issue for every community.

“The county has been going through incredible growth over the past 50 years,” he said. “West Hollywood is going to have the same challenges that all the other cities in the county have.”

He said smart development is what led to West Hollywood’s strong local economy and its ability to boast a budget surplus for capital infrastructure and other services.

Candidate and former Councilman Steve Martin, who has been a member of the community since the 1970s and was part of the movement to incorporate the city, said they all agree urban development is beneficial. But he said, “too often we see it done irresponsibly.” He criticized the “pay-for-play culture” at city hall where benefits for developers are put before benefits for the community.

“We spent four years putting together a General Plan, and the last eight years ignoring it,” he said.

Cautillo said he has not met one resident who said they are happy with the development in West Hollywood.

“You can simply walk around the neighborhoods and see the quality of life has changed, the environment has changed. It is not the urban village it once was. This city has lost its way and I’m here to try to get us back on track,” he said.

Heilman pointed to redevelopments that resulted in significant improvements such as an establishment with hazardous waste that was replaced with a mixed-use development.

“We all live here because of development,” he said. “Somebody developed the buildings we all live in.”

Stillwell said a bigger effort should be made to include the community throughout the planning process.

“Developers have no place in this campaign,” she said.

Candidate Amanda Goodwin, a landlord and business owner, said the city should establish stricter rules on height and setbacks to temper the “bad development,” and that the city should put more focus on “walkability” and parking by requiring it from developers.

“The city council needs to be accountable to this growth and the weight of it … so we don’t pave over our quality of life and so our boulevards don’t become parking lots,” she said.

The candidates were also asked how the city should increase benefits to the community in return for the impacts of urban development. Martin said the most important benefit is affordable housing, and that the city should do more to discourage the demolition of rent-controlled housing.

“There’s not a lot of places for my friends to go,” he said.

Blatt said the city should incentivize more workforce housing and responsible development that fits the city’s needs. She proposed strategies to “defeat the Ellis Act locally” and to incentivize developers to build more compatible projects by closing loopholes, amending zoning codes and utilizing funds for adaptive reuse of existing structures, among other actions.

As Los Angeles County prepared for the homeless count, the issue of homelessness also dominated the forum.

“We have an inclusionary housing ordinance here in West Hollywood that requires 20 percent of all units be set aside for low and very low income. If every city in L.A. County would do that, we could solve homelessness.”

“Just look around you,” Blatt said.

Candidate Joel Quaresimo proposed the city invest in alternative, temporary “micro units” that have been successful in other cities to provide the help and medical care as a more “practical, realistic” approach to help address homeless individuals’ most immediate needs.

As much as the candidates wanted to separate from their opponents on issues surrounding development, they came together around their shared love of West Hollywood.

“One of the challenges we face is the challenge of our success,” Heilman said. “People want to live here, businesses want to relocate here – that’s a good challenge to have.”

Goodwin said she wants to “preserve what we love about West Hollywood – our liberties, our quality of life.”

“So many people are afraid of being kicked out of their homes or that their building is going to fall to developers and be the next one out,” she said. “I want to support small businesses so they can thrive – and mom and pops, it’s what makes us unique. As I said, I don’t want to become East Beverly Hills, I want to stay West Hollywood.”

Clark said his friend remarked recently that the LGBT community is “really great at rallying around issues that affect us directly.”

“But when it comes to standing up for other people and against ‘the man,’ we’re not so great at mobilizing,” he said. “I think we have an opportunity here on city council to develop policy at the local level that promotes that change moving forward.”

Moderator Robert Kovacik, who has traveled around the world as a news anchor and reporter for NBC, said, “unequivocally, there is not a city where the residents are more dedicated and more invested than right here” in West Hollywood.

“You have a very tough choice,” he said to the audience.