Detectives from the Los Angeles Police Department’s Hollywood Division released security camera photographs of a suspect who robbed a hotel in Hollywood twice in late December. 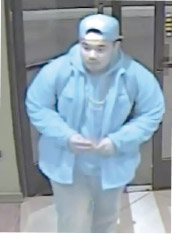 Police hope a surveillance camera photo of the suspect will lead to his arrest. The camera made the suspect’s jacket and hat appear blue, but they were actually black. (photo courtesy of the LAPD)

The first robbery occurred at approximately 1 a.m. on Dec. 25. The suspect entered the Dixie Hollywood Hotel at 5410 Hollywood Blvd., approached a clerk and asked for change for a $5 bill. When the clerk opened a cash drawer, the suspect reached in and stole an undisclosed amount of cash before fleeing.

Two days later on Dec. 27, the suspect returned around midnight. He pushed an employee aside and stole an undisclosed amount of cash from a register.

Officer Zackery Wechsler, of the Hollywood Division, said investigators surmise the suspect lives in the neighborhood near the hotel because the crimes occurred within two days of each other.

“The first time it was a crime of opportunity, and the second time [it was] because he got away with it,” Wechsler said. “It’s the fact he went back there. It was an unusual [method of operation].”

No injuries were reported and no weapons were used, but the incidents scared employees, Wechsler added. Police distributed the surveillance photos to patrol officers who attempted to locate the suspect, and then publicly distributed the photos seeking help from the public.

The suspect is described as Asian, in his mid-20s with black hair and brown eyes. He is approximately 5-feet-2-inches tall and 170 to 190 pounds. The suspect was wearing a black hooded sweatshirt, blue jeans and a black baseball cap with a red bill. He also had multiple chain necklaces and was wearing a gray backpack.

Anyone with information about the robberies is asked to call investigators with the LAPD’s Hollywood Division at (213)972-2954. During weekends and off-hours, call the LAPD’s hotline at (877)LAPD247.