Police are searching for a gunman who shot and killed a clerk early Tuesday morning during an attempted robbery at a Chevron gas station at Los Feliz Boulevard and Vermont Avenue. 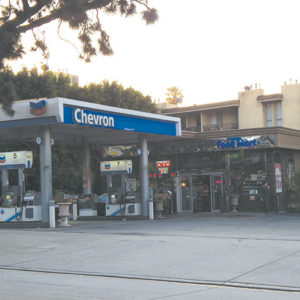 The suspect allegedly entered the gas station at approximately 5:25 a.m., shot and killed a clerk and fled. (photo by Edwin Folven)

Mota said it is unclear whether anything was stolen. Police are looking for witnesses and are checking surveillance video to help identify the suspect.

The gunman was described as a black man approximately 20 to 25 years old. No description was available of the vehicle.

Anyone with information about the incident is urged to call homicide detectives with the LAPD’s Northeast Division at (323)561-3411. During weekends and off-hours, call the LAPD’s hotline at (877)LAPD247.