Updated on 12/7/17: The defendant mentioned in this article, Rafael Mouradian, was charged with misdemeanor petty theft and pleaded no contest to the charge on June 6, said Greg Risling, a spokesman for the Los Angeles County District Attorney’s Office. Mouradian is expected to return for a diversion and sentencing hearing on June 6, 2018, in Los Angeles County Superior Court, Airport Branch.

A 25-year-old Glendale man was arrested on Jan. 8 after he allegedly placed a “skimmer” on the door of a Bank of America branch in West Hollywood and robbed a victim who discovered the device. 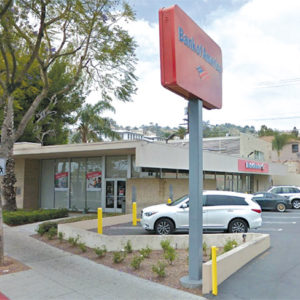 A suspect allegedly placed a “skimmer” on the door of a Bank of America branch in West Hollywood. (photo courtesy of Google Maps)

“Skimmers” are small electronic devices that thieves place on ATMs and other machines that accept credit cards to fraudulently record users’ personal information, said Sgt. Jeff Bishop, with the West Hollywood Sheriff’s Station. The devices usually fit in or over the slots on ATMs and other machines. In the West Hollywood case, the device was allegedly placed on a card reader at the bank branch’s front door that enables customers to enter the building after hours to use an ATM.

Bishop said at approximately 2:30 p.m., a customer attempted to open the door at the bank at 8025 Santa Monica Blvd. and the “skimmer” fell off in his hand. The victim was approached by three men, one of whom forcibly stole the device and ran. The victim chased and tackled the suspect on Crescent Heights Boulevard and called police. Deputies arrived and arrested Rafael Mouradian, 25. The other two men remain at large. No description of them was available.

Bishop said the investigation is ongoing, but the suspect was booked for robbery and will likely also face identity theft charges. Police recommend that people do not take matters into their own hands when they are victims of crime, and should instead call 911.

Bishop said “skimmers” are commonly used by thieves to obtain personal identification numbers for credit cards and ATM cards. The information can later be used to steal money from customers’ accounts.

“It’s a continual problem,” Bishop added. “Anytime you use your debit card, check the machine, check the device. Make sure no wires are exposed.”

Anyone with information about the incident is asked to contact the West Hollywood Sheriff’s Station at (310)855-8850.

CUT Lounge in Beverly Hills is a cut above