Det The Los Angeles City Council on Tuesday extended a $50,000 reward for information leading to the arrest and conviction of a driver who struck and killed an elderly pedestrian in Hollywood last Nov. 26. 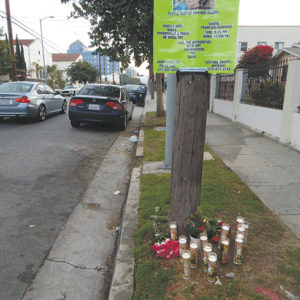 Family members created a memorail for Gabriela Futsi at the scene of the collision. (photo by Edwin Folven)

The reward was initiated by Councilman Mitch O’Farrell, 13th District, who held a press conference at the site of the hit-and-run collision in December to appeal for the public’s help.

The victim, Gabriela Futsi, 70, was crossing Fountain Avenue at the intersection with Kenmore Avenue at approximately 9:25 p.m. on Nov. 26 when she was struck by a vehicle that sped away. Futsi lived a couple blocks away from the accident scene, and was walking home from a Burger King restaurant on Sunset Boulevard when she was struck. Paramedics took her to Los Angeles County-USC Medical Center and she died the following morning.

Police obtained surveillance camera footage that shows the vehicle was a sedan that has a dark-colored top and was lighter-colored on the bottom. The vehicle was traveling east on Fountain Avenue. The speed limit is 30 mph, and the driver appeared to be speeding, according to police. The intersection does not have a marked crosswalk, but the victim was crossing legally from corner to corner when she was struck.

“[The vehicle] was a very distinct color,” said Capt. Jonathan Tom, of the LAPD’s Central Traffic Division. “It never slowed down. It kind of [swerved] and just kept going.”

Rewards are automatically offered to help solve hit-and-run collisions in Los Angeles, but they must be extended after 60 days. The councilman and police hope the reward will prompt someone to come forward with leads. Anyone with information is urged to call Det. Jose De Leon, at (213)833-3746 or (213)833-3713. Reports can be made anonymously. During weekends and off-hours, call the LAPD hotline at (877)LAPD247.