Developer CGI Strategies has proposed a new 12-story mixed-use development on the northwest corner of Wilshire Boulevard and La Brea Avenue, adjacent to the location of a future Metro Purple Line subway station. 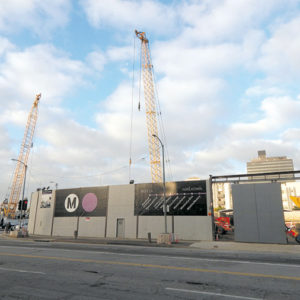 A new mixed-use development is proposed on the corner of Wilshire Boulevard and La Brea Avenue, adjacent to a future Purple Line subway station currently under construction. (photo by Edwin Folven)

CGI Strategies is in escrow to purchase the properties at 627-667 S. La Brea Ave. The proposed development will include 160 residential units as well as ground-level retail and restaurant space and a public market hall. The building would be built on space currently being used as a staging area for subway station construction. Once the subway station is completed, CGI will create a public plaza adjacent to the station with community open space, according to a press release about the project.

“This stretch of La Brea Avenue, just north of Wilshire Boulevard, is an exciting, burgeoning corridor of arts, culture, fashion and dining for Los Angeles, and we’re fortunate to have assembled and acquired this site to bring a fresh, residential and community-focused project to the area,” said CGI CEO Gidi Cohen. “The project will include a well-curated mix of quality eateries, artisanal food vendors, retail services and housing for those who live and work in the neighborhood.”

Tom Hodgin, project manager for CGI Strategies, said the project is in the conceptual stages and may change before the developer seeks final entitlements to build. He said the goal is to work with community groups and stakeholders in the area to create an amicable project that fits into the neighborhood.

“We are still in the infancy of outreach,” Hodgin said.

The proposed project was designed by Killefer Flamming Architects of Santa Monica, referencing the art deco designs that are common along the Miracle Mile and La Brea Avenue corridor. A 12-story tower would serve as an architectural anchor, with the market hall on the first two floors and a rooftop restaurant and observation deck, according to the press release.

The tower will be flanked by a 7-story structure with ground-level retail space and residential units on the upper floors. Fourteen of the 160 residential units will be designated as affordable housing for low income individuals, according to the press release. A three-story subterranean garage will provide a minimum of 233 parking spaces.

James O’Sullivan, president of the Miracle Mile Residential Association, said he heard about the project but is waiting to see exactly what is proposed before forming an opinion. He is open to meeting with the developer and other stakeholders in the neighborhood, and hopes everyone can come to a consensus on a project that will benefit the community.

Hodgin said the developer is eager to build a project that brings housing to a neighborhood near a future hub for public transportation. CGI anticipates receiving entitlements to build in late 2017.