On Jan. 22, 1973, the Supreme Court issued its decision on Roe v. Wade, which is known as the case that legalized abortion nationwide. The court ruled that the Ninth Amendment right to privacy is “broad enough to encompass a woman’s decision whether or not to terminate her pregnancy.” 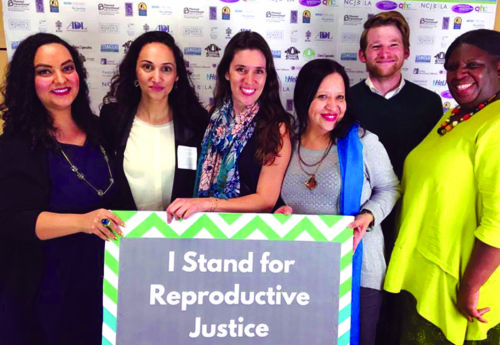 “It’s not about whether or not you support abortion. It’s about providing humans the privacy and trust to make decisions about their own bodies with their medical provider. That extends to anything related to healthcare,” said Rosaline Helfand, a member of the advocacy committee for the National Council of Jewish Women / Los Angeles (NCJW).

For years, NCJW/LA has hosted events to celebrate the Roe v. Wade decision and to educate and advocate for reproductive healthcare access – especially to abortions. But this year, 44 years after the landmark decision, NCJW/LA’s celebration will also be a “definitive, loud statement” that any attack from the new presidential administration will not be tolerated, the group said.

“Since the election, so many who support reproductive healthcare or everything including access to checkups … is really worried about potential loss of funding, or about overturning Roe v. Wade,” Helfand said. “There’s a feeling, I think, that we can’t wait and see. Because by the time it happens it might be too late.

“We need to say, ‘look, we need to come together. We’re really going to work to make sure we protect our freedoms.”

This year’s event is scheduled for Jan. 19, the day before the inauguration of President-elect Donald Trump, who said during his campaign that he hopes to appoint a Supreme Court Justice that would vote to repeal Roe v. Wade and parts of Obamacare, which includes reproductive health services for women.

The event is called a “Rally to Save Roe.” The Roe v. Wade case was a challenge against a Texas statute that made it a crime to perform an abortion unless a woman’s life was at stake. The case was filed by “Jane Roe,” an unmarried woman who wanted to end her pregnancy.

Helfand said NCJW/LA’s held a meeting in October to plan the anniversary event for the court decision. Initially, they planned for women to tell stories inside the NCJW council house, which typically fits approximately 200 people.

After the presidential election, the next meetings had a different tone.

“We got together as a committee, and everyone said, ‘OK, this is huge. We don’t know what’s going to happen in the next four years, but a lot of threats have been made (to healthcare policies and funding),’” Helfand said. “We decided we had to transform this event.”

This year, after a “giant rally” outdoors, participant training will provide next steps for those who “will not sit idly by.” Members from NCJW/LA, sponsors and event partners will give “on-the-spot” advocacy training for people of all experience levels, and a “basic tool kit.” NCJW/LA also asked partners to provide ideas and opportunities for people to take action, such as lobby trips, training to be a clinic escort, workshops on how to write op-eds, or gathering support for the Women’s March in West Hollywood on Jan. 21 as part of the Million Women March.

Speakers will discuss what it was like to live “pre-Roe” in the 1960s, when women or doctors were jailed, and patients went to “amazing lengths” to receive reproductive health services.

“A lot of people are actually going through that stuff now,” Helfand said. “States have been enacting law after law to make it harder and harder to get an abortion or find a place to get an abortion. It’s about fighting the restrictions. … We’re talking about how much worse things can get, but also about putting an end to the massive restrictions that have been put into place.”

The presence of Vice President-elect Mike Pence, who signed laws restricting abortions when he was governor of Indiana, is also stoking concerns.

Last week, Speaker of the House Paul Ryan said members of GOP-controlled Congress plan to defund Planned Parenthood – one of the sponsors for the rally on Jan. 19 – partly because it provides abortions.

“I am appalled at Paul Ryan’s announcement that defunding Planned Parenthood will be included in a forthcoming fast-track reconciliation bill,” said West Hollywood City Councilwoman Lindsey Horvath. “The federal government is already prevented from funding abortions. This action would deprive Planned Parenthood’s clients – primarily, women and girls – from receiving safe, competent healthcare services they need, but cannot afford on their own. Republicans seem to be wasting no time in further endangering some of our nation’s most vulnerable citizens – especially women and girls who cannot afford vitally important pap smears, mammograms and other basic healthcare services.”

Last year, Planned Parenthood-Los Angeles (PPLA) opened a new center in West Hollywood – the first pro-choice city in America – partly due to an increased demand for services. In 2015, PPLA logged more than 270,000 patient visits, conducted 162,000 STD tests, provided more than 55,000 rapid HIV tests and completed more than 14,000 cervical cancer screenings, according to Art Ochoa, senior vice president of community relations at Cedars-Sinai Medical Center and member of the PPLA board of directors. Sue Dunlap, president and CEO of PPLA, said Los Angeles is seeing an “ever-increasing demand.” She added that PPLA receives more than 2,000 phone calls a day from people seeking services and the centers regularly serve more than 1,000 patients per day, half of which are walk-ins, Dunlap explained.

Helfand said with President Barack Obama on his way out, now it’s “up to everyone locally to take a stand.”

“As the nation’s first pro-choice city, West Hollywood has a firm commitment to protecting every woman’s access to healthcare services. We stand firm with Planned Parenthood and its patients, and, as a member of the West Hollywood City Council, I will do everything I can to fight this unconscionable proposal,” Horvath said in a statement.

“The Rally to Save Roe is about raising up our voices to make sure that reproductive rights, health and justice, including the right for a woman to choose an abortion, do not get taken away,” said Hillary Selvin, executive director of NCJW/LA.

For information on Planned Parenthood, including services, clinics and appointments, visit plannedparenthood.org or call (800)576-5544. Appointments are not necessary.