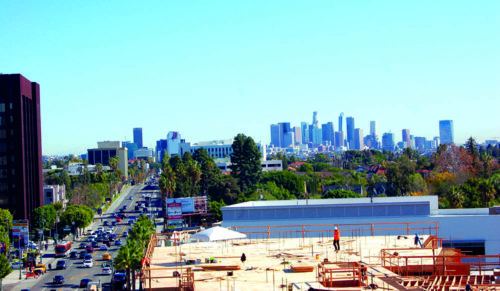 A new year and new proposed developments could change Los Angeles’ skyline, and lawmakers are working to address public perception that corruption occurs during the approval process.
(photos by Gregory Cornfield)

Ryu said the public’s mistrust of the influence of campaign contributions has only been exacerbated by developers and those with business before the city of Los Angeles who give political donations widely or, in some cases, disregard campaign finance rules entirely. Unlike the ban the city has on companies competing for city contracts, no such ban currently exists for developers looking for discretionary approval of their projects.

“Will it completely eliminate that perspective [of corruption or pay to play politics]? We will have to wait and see,” Ryu said. “It won’t be the end-all, but it does rebuild that trust.”

The proposed measure would ban contributions to city elected officials and candidates for city office from developers and their principals with development projects currently or recently before the city.

Ryu said his measures would extend to office holder accounts, and that he will always be open to implementing additional ways to improve transparency. He also directed the city attorney and the city’s ethics commission to report on the best ways to strengthen and improve the measures.

“No matter what is done, it’s a step in the right direction,” he said.

The proposal would also increase the matching fund rates from the current 2-1 match in primary elections and 4-1 match in general elections to 6-1 in both primary elections and general elections for all candidates who qualify for matching funds. The councilmen also directed staff to prepare possible options for the definition of a “developer” to ensure as wide a net as possible is cast, in addition to exploring whether contractors and subcontractors on development projects requiring discretionary council approval should be included in the ban.

Additionally, the councilmen request a report on the costs and feasibility of increasing the size of enforcement staff at the Ethics Commission to increase the number of inspections and audits that can be carried out to reduce the incidences of campaign finance fraud and improve transparency.

Koretz said he believes a lot of the perception of corruption “reached a fever pitch” due to media reports stemming from the Neighborhood Integrity Initiative, a ballot proposal that would put a two-year ban on large-scale developments that do not conform with city code. But now that it’s at a fever pitch, he said council members will be more likely to approve reforms.

“I don’t think a few months ago that would have been possible,” he said, adding he doesn’t think there is much reality behind the perception.

He agreed with Ryu that the proposals will be a “significant step.”

“But as long as the perception is out there, we need to address it,” he said. “If people have ideas for things to make it stronger, I’m sure council members would be open to it.”

Krekorian said the system in place now “is failing us all.”

“The reform ideas we’re proposing are aimed at upending this by getting developer money out of city hall and creating a more thoughtful, transparent and fair atmosphere,” he said in a statement.

The proposals would also require campaign committees to provide additional reporting on non-individual entity contributors, including a category that denotes contributions derived from developers and their principals.