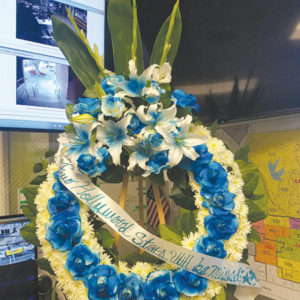 Robinson, 42, suffered from cancer and died on Jan. 15. He joined the department in August 2009, and is survived by his wife Anna Lee, son Joshua, daughter Evelyn, father Lynn, mother Geor-gia, brother David and sisters Elizabeth and Laurie.

Robinson was the focus of an article in the Park Labrea News and Beverly Press in November when fellow officers waited tables at the California Pizza Kitchen restaurant at Hollywood and Highland to raise money for their colleague’s medical and personal expenses. Personnel at the police station recently created a memorial for Robinson and Slater, who passed away unexpectedly on Jan. 16 in Valencia. Slater, 52, joined the LAPD in June 1988. He is survived by his wife Judy, daughter Riley, mother Marie and sister Maureen.