Recent rainy weather has prompted organizations that serve the homeless to increase efforts to provide shelter for people living on the streets. 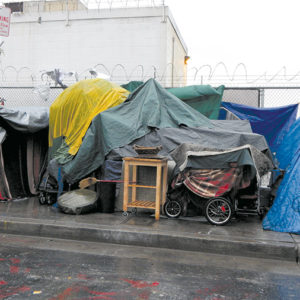 Many homeless individuals stay in tents or use tarps to protect themselves from the elements. It can sometimes be difficult to convince them to enter a formal shelter, according to an administrator for People Assisting the Homeless. (photo by Edwin Folven)

The Los Angeles Homeless Services Authority’s (LAHSA) 13 shelters have been open 24-hours since Sunday, when the most recent series of storms was forecast to move into the area. LAHSA shelters are normally open from 5 p.m. to 7 a.m. during the rainy season from Dec. 1 through March 1. The hours are extended on a case-by-case basis.

“When we anticipate either extreme cold or heavy rain, we make arrangements to extend the hours,” said LAHSA spokesman Tom Waldman. “The hours are extended so people can stay dry during the day. We look at whether there is a 50 percent or greater chance of rainfall in excess of half-an-inch over a seven-day forecast.”

LAHSA has approximately 1,450 beds available in shelters located in cities throughout Los Angeles County, from Lancaster to Long Beach. The current occupancy rate was not available, but Waldman said many homeless individuals are taking advantage of the opportunity to get out of the wet and cold weather.

LAHSA also has a team of approximately 80 people who locate homeless individuals and advise them about available space in shelters and other services. Administrators monitor weather forecasts daily and plan accordingly. The outreach is stepped up during winter.

“We make a concerted effort when the rain is coming or the cold weather is coming,” Waldman added. “We try to go to the people who are unsheltered to encourage them to seek shelter.”

LAHSA is supported by the county and city of Los Angeles, and receives federal funding. The shelters are located in churches and at other locations. In the central Los Angeles area, Ascencia-Highland Park runs a shelter at 5619 Monte Vista St., First to Serve operates shelters at 1300 Federal Ave. and 1177 W. 25th St., and Bethel LA CDC/AME has a shelter at 7900 S. Western Ave. Collectively, the shelters have approximately 545 beds.

Waldman said the outreach teams sometimes drive people to the shelters, or direct them to locations where shuttles offer rides.

“If there is an immediate need, if it is pouring rain and they see someone on the street, they will take them in their vehicle,” Waldman said.

LAHSA has a hotline at (800)548-6047 with information about the shelters, and provides information at lahsa.org. LAHSA also serves the cities of West Hollywood and Beverly Hills, Waldman said.

Areas lacking LAHSA shelters include Hollywood and Wilshire, where another organization is trying to fulfill the need. Hollywood 4WRD, a consortium of nonprofits, churches, government entities, businesses and community activists has launched the Winter Refuge program, according to Kerry Morrison, executive director of the Hollywood Entertainment District and a member of Hollywood 4WRD.

“We know there is a need [to shelter] chronically homeless people,” Morrison said. “They are able to stay overnight. They don’t have to pack up and leave every day.”

Morrison said a 65-bed shelter run by People Assisting the Homeless was previously open in Hollywood near Sunset Boulevard and Western Avenue, but closed last summer because of a lack of funding. Hollywood 4WRD also previously looked into opening a larger shelter, but organizers learned that there are few locations available and the costs are too high with the limited amount of public funding available.

“It’s no surprise these shelters are located in armories and churches and other facilities. There needs to be access to restrooms,” Morrison said. “Federal funding for transitional shelters has been eliminated. In the midst of a housing crisis and a homeless crisis, we have less shelter space than we did six years ago.”

PATH CEO Joel Roberts said the organization still operates a shelter program independent of LAHSA. There are 120 shelter beds available at PATH’s facility at 340 N. Madison Ave. in the East Hollywood area, and a 32-bed shelter specifically from homeless veterans in West Los Angeles. The occupancy rate is generally higher than 95 percent, and usually “closer to 100 percent,” he said.

“If they are in a tent and in an area where they feel safe, they typically do not want to go to a shelter with 200 people,” Roberts said. “As a society, we should provide beds for people who really want them. The need for these beds is greater than the number of beds.”

Roberts added that PATH also offers services for people in West Hollywood and Beverly Hills. People are encouraged to call (213)440-2460 or visit epath.org for information.

Roberts said even with the different partnerships, keeping shelters open during the rainy season can be challenging. The difficulty in planning is exacerbated by situations like last year’s forecast for El Niño, when preparations were made to shelter the homeless but the rainy season was not as severe as anticipated.

“If it continues to rain and flood, the city and the county are going to have to respond,” Roberts said. “I don’t think they want to gear up for it and find out the rain [so far] was just a fluke.”