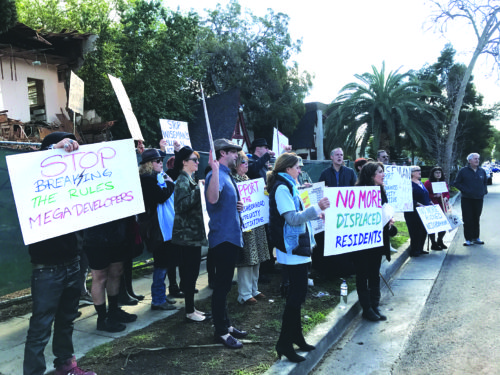 Local residents took to Formosa Avenue in Hollywood on Tuesday afternoon to voice their support for Measure S, and their opposition to demolition on the street being investigated by the city.
(photo by Luke Harold)

Residents of North Formosa Avenue in Hollywood were awakened at 7 a.m. on Saturday, Jan. 21, by a bulldozer partially demolishing a recently emptied residential property in the middle of the block.

But the day prior, the Los Angeles Department of Building and Safety had ordered a stoppage of construction, including any demolition. The property managers had also been facing allegations from neighbors and former residents that they were illegally renting units via Airbnb after longtime tenants had been vacated through the Ellis Act.

“They have no respect for the neighborhood, for Hollywood’s historic identity that you can’t get anywhere on the planet but here,” said Richard Koehler, who has lived in an adjacent building on Formosa Avenue for 15 years.

He was one of many local residents who stood on the street outside of the property, located at 1332-1334 N. Formosa Ave., on Tuesday, Jan. 24 to protest the destruction of the property.

City officials said they’re investigating the demolition of 1332-1334 N. Formosa Ave. and whether there will be penalties levied for the demolition of the building, owned by Belmond Homes LP and managed by Wiseman Residential.

Koehler said he received a 120-day Ellis Act eviction notice from Wiseman a few months ago. Jianna Maarten, who has lived on Formosa Avenue for 12 years, said she received a one-year notice last March.

“By the time I got police here, this is what the building looks like now,” she said, pointing to the rubble on the property’s lawn, as only about half of the structure is left standing.

Both Belmond and Wiseman have Michael Cohanzad listed as the agent for service of process, an appointee required by LLCs and corporations to receive lawsuits and legal documents on behalf of the business, according to the California Secretary of State. Both companies have 11601 Santa Monica Blvd. listed as their address. Wiseman’s registration date is listed as May 2002, while Belmond’s is January 2016.

Tenants of 1332-1334 N. Formosa Ave. had been evicted through the Ellis Act last year, residents said. The act was intended to allow landlords to leave the business if their operations were losing money. But residents and city officials have said the law has been exploited by larger developers looking to demolish lower-rent units and replace them with luxury housing.

Estevan Montemayor, a spokesman for Councilman David Ryu, 4th District, confirmed that Ryu had requested a stop-work order until permits and approvals could be verified.

“This is still under review, and we are asking the city attorney for the strongest penalties possible on any alleged violations, including the re-rental as short-term housing,” Montemayor said. “[Ryu] strongly believes that developers should be not able to reap the benefits of the Ellis Act if they are found to be in violation of it. Too often, developers take advantage of state laws and use loopholes to drive tenants out of their homes and destroy our affordable housing stock.”

David Lara, assistant inspection bureau chief and public information officer of the Los Angeles Department of Building and Safety (DBS), said DBS had issued a notice to stop construction before the property was demolished. DBS, the Los Angeles Housing and Community Investment Department (HCID) and the city attorney’s office are investigating the matter, he said.

Asked whether demolition of the property was illegal, Lara said, “They did not have a permit.”

Lara said DBS is only recognizing Belmond Homes, “the owner as described in L.A. County records,” as it moves forward with the investigation.

In an email to residents, HCID said the property owners had complied with the Ellis Act by stating their intent to withdraw the units at 1334 Formosa Ave. from rental use to demolish the structure and build new multi-family housing. However, the department began looking into whether the owner complied with an Ellis Act provision that prohibits immediately re-renting an apartment that was vacated through the act.

Residents and Ryu staffers both claim Belmond and Wiseman had been condoning the use of the newly-vacated units for short-term Airbnb rentals.

The property is at the center of a lawsuit filed on Jan. 3 by the nonprofit Eviction Defense Network on behalf of six former tenants of those buildings, according to a complaint filed with the Superior Court of Los Angeles. It names Belmond, Wiseman and Airbnb as defendants for their role in allegedly violating the law by re-renting the evicted tenants’ units so quickly.

“Based on a pending investigation of illegal use as a short term rental, HCID subsequently revoked the demolition clearance in order to review the evidence and all options available to the city,” the email said. “This revocation was transmitted to [DBS], who in turn issued a ‘notice to stop construction and intent to revoke building permits’ and posted it at the site and notified the owners on Jan. 20. The city is evaluating all options in response to the owners’ action to demolish the building.”

Benjamin Cohanzad, a representative of Wiseman Residential, denied that the company had been renting units in either property via Airbnb. He also refuted DBS’s claim that he did not have a permit for Saturday morning’s demolition, despite signage at the property stating otherwise.

Lara said DBS intended to revoke the permit Cohanzad was referring to, and therefore it did not supersede the notice to stop construction that had been issued the day before. Cohanzad said the demolition crew did not see the sign ordering a stoppage of construction.

Cohanzad conceded that new development spurred by the Ellis Act evictions hurts longtime residents of units who are paying rent below market value, but that the housing crisis in Los Angeles would only worsen without new development.

He said he and his colleagues are “not the big, bad, greedy developers they make us out to be.”

Councilman Jose Huizar, 14th District, is the only current officeholder in the city to have accepted contributions from Wiseman employees – four donations totaling $2,000 between 2005 and 2010 – according to city records. A spokesman for Huizar did not return a request for comment.

Wiseman employees donated $37,350 to Los Angeles office-holders and candidates from 2003 to 2012, city records show. Many of them were by Michael, Isaac, Ben and other employees with the last name Cohanzad. Wiseman made an additional $3,500 in contributions attributed to the company between 2003 and 2005.

No donations have ever been made to city officeholders by Belmond Homes or its employees.

[…] vote was a result of a controversial demolition of residential units at 1332-1334 N. Formosa Avenue in Hollywood in January. Bulldozers partially demolished the building, despite a notice from the Los Angeles Department of […]

They are still in hand with Airbnb hosts repeat same story. 108 s. Kings rd thrust 106. 90048. And are connected to hosts how? Does Airbnb refer ? 7050- 7060 hawthorn 90028.in same process. Airbnb hosts are working with management companies to oust long term tenants
Its sick. Greed.

[…] In this case, Wiseman tossed everyone out via the Ellis Act. Wiseman would be unable to Airbnb the apartments, because short-term rentals of evictions are stupidly, blatantly against that law (and reprobate), so that’s therefore exactly what they did. HCIDLA told them to stop, and Wiseman responded by beginning demolition work. Again, without a permit. HCIDLA came out multiple times with stop-work orders and so Wiseman finally destroyed the building—with the electricity and gas still on—on January 21, 2017. Read more about it here and here. […]