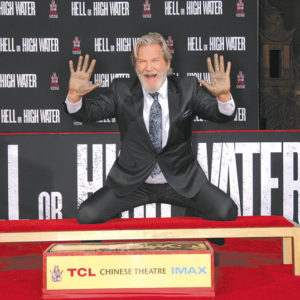 Actor Jeff Bridges placed his handprints and footprints in cement in the forecourt of the TCL Chinese Theatre IMAX on Jan. 6. Bridges became the 301st entertainer since 1927 to participate in a handprint/footprint ceremony at the historic theater on Hollywood Boulevard. Six-time Oscar nominee Bridges won an Oscar in 2010 for his performance in “Crazy Heart.” The son of actor Lloyd Bridges, he grew up in a show business family and as a child appeared on his father’s underwater adventure series, “Sea Hunt.” Later, Jeff and his brother Beau Bridges became successful actors.

Bridges’ first big role was as a small-town Texas boy in the 1971 Peter Bogdanovich film, “The Last Picture Show,” for which he was nominated for his first best supporting actor Oscar. His other Oscar nominations are for roles in “Thunderbolt & Lightfoot,” “Starman,” “The Contender” and the 2010 remake of “True Grit.” Bridges is also an accomplished photographer, painter and musician.

The TCL Chinese Theatre is located at 6925 Hollywood Blvd. For information, visit tclchinesetheatres.com.