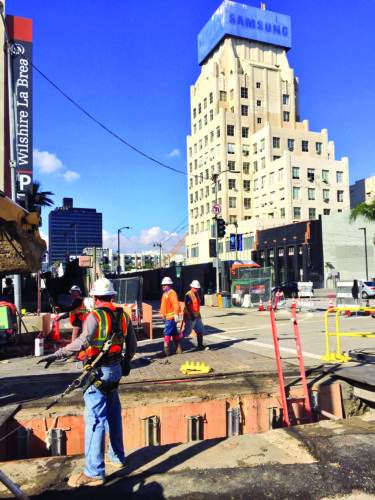 Construction workers with Skanska-Traylor-Shea continue work on the first section of the Metro Purple Line Extension at the intersection of Wilshire Boulevard and Sycamore Avenue.
(photo by Gregory Cornfield)

Despite growing concerns, the Metro Board of Directors today will vote on a recommendation to award a $1.4 billion contract to joint construction firm Tutor Perini/O & G (TPOG) for work on the second section of the Purple Line Extension.

The project will extend the Purple Line by 2.6 miles to Century City, with one station at Wilshire Boulevard and Rodeo Drive in downtown Beverly Hills and a station in the heart of Century City.

TPOG is a joint venture of Tutor Perini Corporation of Sylmar, California and O & G Industries of Torrington, Connecticut, with Frontier Kemper as a tunneling subcontractor. Tutor Perini has completed infrastructure in large metropolitan areas and has built railways and stations for Metro including multiple portions of Metro’s Red Line Project.

But Ron Tutor’s name again being assigned to a Metro project has raised concerns for former Los Angeles County Supervisor and City Councilman Zev Yaroslavsky. He said he hopes the board takes a close look to determin if Metro is being “low-balled” with a bid that is not credible.

“Metro has had a long history with this company,” Yaroslavsky said. “In fact, there was a lawsuit that Metro brought against [Tutor] that resulted in a false claim rendered against the contractor. That would have entitled Metro to [ban] that contractor from further bidding. Metro decided for some reason not to [ban] him.”

Tutor’s work on the Metro Red Line led to nearly two decades of litigation for the city of Los Angeles due to construction challenges, delays and cost overruns for the first sections in the mid-1990s. Tutor’s firm completed the third section of the Red Line to North Hollywood within the project’s budget, and all litigation has since been resolved. But according to media reports, Tutor’s actions led former Mayor Tom Bradley to describe Tutor as the “greatest change order artist” he has ever seen, by submitting low bids to win contracts, and then submitting change orders during the project to make up for it.

According to a Metro staff report for the recommendation, three proposals were submitted that were “comparable on their technical merits,” including TPOG. Metro made its recommendation after a “thorough and extensive” and “fair and open” competitive bidding process, in which two other firms – Skanska-Obayasji and Walsh Strabag – also qualified for proposals. But the TPOG bid was ultimately deemed to have the “best value.”

“Best value” is determined by a formula based on price, features, functions, life-cycle costs and other criteria. According to the report, “project management” is weighted at 45 percent, “technical approach” is weighted at 20 percent and price is weighted at 35 percent. Metro’s staff recommendation is based on the firm’s competitive proposal of $1.37 billion, which is approximately one-half billion dollars lower than other competitor bids.

“While the other two (proposals’) weighted scores for project management and technical approach were minimally higher, the difference in the technical capability found in their proposals was not great enough to justify the significantly higher prices proposed. The Tutor Perini/O & G proposal is determined technically comparable at an award price that is approximately $452 million lower than the next lowest proposal,” according to Metro staff’s procurement summary.

“It raises my antenna to see somebody with whom the agency had a very difficult relationship back at it and low bidding,” Yaroslavsky said. “That’s his reputation, he bids low and makes it up down the line. Maybe this time it’s legitimate and credible. I don’t know. But it doesn’t make sense that one bid is a billion dollars more. Why do we have three such widely varying bids?”

In a statement, Metro CEO Phillip A. Washington said, “with their modern history of delivering successful tunneling projects throughout the world, Metro is confident that this contractor will play a critical role in helping us build the world-class public transportation system we have promised to voters.”

But when Beverly Hills Mayor John Mirisch learned about Tutor’s history – which includes litigation with the city of San Francisco after Tutor reportedly submitted more than $100 million in change orders – he said he was worried about the project that will tunnel below his city.

“We received some information that led us to have grave concerns about Tutor’s ability to do community outreach and do the work to have as smooth a construction period as possible,” Mirisch said. “We want someone with a strong track record.”

Mirisch said from a fiscal perspective, Metro should create measures to limit change orders and apply cost overruns to the contractor. He said “there is too much money at stake” and that he isn’t satisfied or confident in Metro’s form of government in running a multi-billion dollar transportation agency, particularly in terms of transparency.

“It’s all about money, and not mobility,” he said.

To minimize the amount of time delayed by change orders, the Metro staff will also recommend the board give Washington authority to execute change orders up to the marked budget limit of $2,440,969,299. TPOG’s bid totaled $1,376,500,000. Any change that results in an increased budget would still require board approval.

On Wednesday, Washington said he is confident in the recommendation for TPOG.

“I don’t think there was anything wrong with the recommendation,” he said.

He said he and Metro are aware of the past litigations with Tutor, but said all of that has been resolved.

At Metro’s construction committee meeting on Jan. 19, committee members sent the bid forward for approval without recommendation because some members could not vote due to reported conflicts of interest.

Communication deputies for Mayor Eric Garcetti, who is Metro board vice-chair, declined opportunity to comment and would not confirm whether he plans to recuse himself from the vote with the full board on Jan. 26. Supervisor Sheila Keuhl, 3rd District, is also a board member, but she was not available for comment by press time.

Washington said the formula to determine the score for the contract bids does not take into account if the firm has made any contributions to any of the board members’ political campaigns or to any of the county initiatives. But he said that would be irrelevant from his perspective.

“We have a comprehensive review process for bidding here. This was the best value proposal,” he said.

To alleviate financial risk, Washington said they have a very experienced project management team and an updated change order process.

“The change order process is one that we keep a very close eye on now,” he said. “We will do the same with this contract here.”

Washington pointed out that arguments and conflicts over large-scale projects often arise due to government agencies making change orders, and the contract firm marks up costs for additional labor time as market rates are updated.

Metro intends to implement a strong oversight plan with experienced staff to ensure the project is completed as intended and remains on time and on budget, the agency said in a release. Metro will also conduct regular monthly reviews of the project status. That includes “executive partnering” between Metro and the contractor up to the CEO level to resolve project claims and changes for the additional time needed.

Completion of the second subway section is anticipated no later than 2026 per a funding agreement with the Federal Transit Administration, and Metro is aiming to possibly finish the project at an earlier date.

The full Metro board is scheduled to consider the recommendation at its Jan. 26 meeting. According to Metro staff’s report, not moving forward with the recommendations will delay the schedule, increase the cost of the project, and jeopardize $1.5 billion in grants and loans from the U.S. Department of Transportation, as well as jeopardize completion of the Westside Purple Line Extension by 2024.

A third and final section will extend the subway to the Westwood/VA Hospital. Construction of this last section is planned to begin as early as 2019.

Tutor Perini Corporation did not return calls for comment.

For comparison, Skanska-Traylor-Shea – the joint venture completing the first section of the Purple Line Extension from Western Avenue to La Cienega Boulevard – was awarded the project in 2014 with a contract bid of $1.6 billion. According to Dave Sotero, communications manager for Metro media relations, the first section is 15 percent complete, and the joint venture has made “modifications” totaling $5 million – or .3 percent of the contract bid.