Serving chimichangas to the Empire in space: The top 10 films of 2016

Sad. While Donald Trump might overuse that word in one of his countless tweets, it better describes the tone of nearly every critically-acclaimed film of 2016. From “Manchester by the Sea” to “Moonlight,” the goal of the year seems to be evoking as many tears as possible. That might work for some, but none of them truly worked for me. 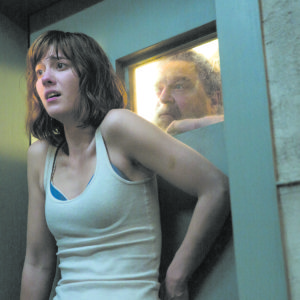 Mary Elizabeth Winstead and John Goodman star in “10 Cloverfield Lane,” a film with a climax sure to surprise audiences. (photo courtesy Paramount Pictures)

While I appreciate the point of “Moonlight,” praise Viola Davis’ performance in “Fences” and found “La La Land” to be cute, I need something else from my top picks. In some cases, I need a plotline, less meandering, more movement. In others, I just needed to emotionally feel something. These are my top 10 filmes of 2016:

All kinds of evil visits a Protestant family in 17th century New England, slowly leading to an explosive conclusion that’s truly disturbing in “The Witch.” Equally disturbing, “Don’t Breathe” is a pulse-racing thriller, complete with the villain’s fatal nihilism.

Chimichangas, unicorns and an obscene amount of sex jokes – everything a superhero film should have. Add to that Ryan Reynolds’ campaign for an Oscar nom and the result is a hilarious experience starting as early as the satiric opening credits.

Death is no easy topic. Leave it to a tree monster voiced by Liam Neeson to guide us through the five stages of grief. Visionary filmmaking helps heart-wrenching material go down a little bit easier. Plus, all those tears will moisturize the face nicely.

No doubt 2016 will be remembered as a year racism returned to public life. Luckily, “Hidden Figures,” along with a slew of other films last year, reminds us of the important contributions many have made to a whitewashed American history. If you know nothing about the story of Katherine G. Johnson (Taraji P. Henson), Dorothy Vaughan (Octavia Spencer) and Mary Jackson (Janelle Monáe) – all black women working at NASA during the Space Race – then get ready for a truly enjoyable history lesson.

Disney Animation finally learned how to make better films than Pixar. Never thought we’d see the day. Yet here we are, and not one but two such films make “Finding Dory” feel like a lazy DreamWorks film.

John Goodman channels Kathy Bates, à la “Misery.” This kinda-sequel to 2008’s “Cloverfield” expands that narrative universe in a wildly original way. It views like a “Twilight Zone” episode but has the jaw-dropping climax only a feature-film budget can afford.

While this prequel to “Star Wars: A New Hope” has a rocky start and doesn’t know how to use Forest Whitaker, “Rogue One” is arguably the second best film in the entire franchise. Replicating the tone of “The Empire Strikes Back,” this one shows us what “Star Wars” should be: dark, complex.

Let’s not forget it proves diverse casting isn’t merely a PC ploy but the path of filmmaking. Why wouldn’t a galaxy far, far away be diverse? Welcome to the future of science fiction. If that makes you roll your eyes, you’re probably a bad person.

The Marvel Cinematic Universe is a force of nature, unstoppable by any hipster wishing for more indie films and less caped crusades. The third Cap film might not seem like a perfect movie, and it certainly doesn’t solve the entire universe’s villain problem, but this is a perfect adaptation of a comic book.

It focuses on one character, Cap (Chris Evans), but doesn’t shy away from including a ridiculous amount of other familiar and new faces. That might seem like overload, but in the Russo brothers’ hands, it’s incredibly satisfying and well crafted.

Speaking of films that’ll make you cry, Antoine de Saint-Exupéry’s story is a classic, but this animated feature adds to it in a monumental way, beautifully depicting the adapted material and then enriching it with an original story.

Sci-fi with a brain is in short supply, but every few years a film like “Blade Runner,” “Children of Men” or “District 9” comes around. “Arrival” is a truly marvelous film for genre fans and general moviegoers alike. Inventive creature design and some twists to keep you confused until the end.

This is the kind of film meant to be shared with everyone. A linguist (Amy Adams) learning to communicate with aliens might seem dull, but that’s only if you don’t truly understand the power of language. As for acting, Adams is the leading protagonist this country needs, not the one it deserves.